I have never really believed in heroes, and I never had one when I was growing up. But perhaps the closest I ever had was Damon Hill.

It was always clear that Damon Hill wasn’t necessarily the most gifted of drivers. That was even obvious to me watching the 1996 Australian Grand Prix as a 9 year old. The fact that his debutante teammate Jacques Villeneuve was running ahead of him underlined that point even to me as a new, young fan.

You couldn’t even call Damon Hill a “plucky Brit”. He wasn’t the underdog, because his father Graham Hill was a three time World Champion. Graham Hill also won the 24 Hours of Le Mans and the Indianapolis 500. He was the only person ever to achieve this ‘grand slam’ of winning all three of motor racing’s most prestigious events.

But what always came across to me as a viewer was that Damon Hill had to dig deep to achieve what he did. So I always admired him. But that just scratches the surface of what makes Damon Hill so interesting. 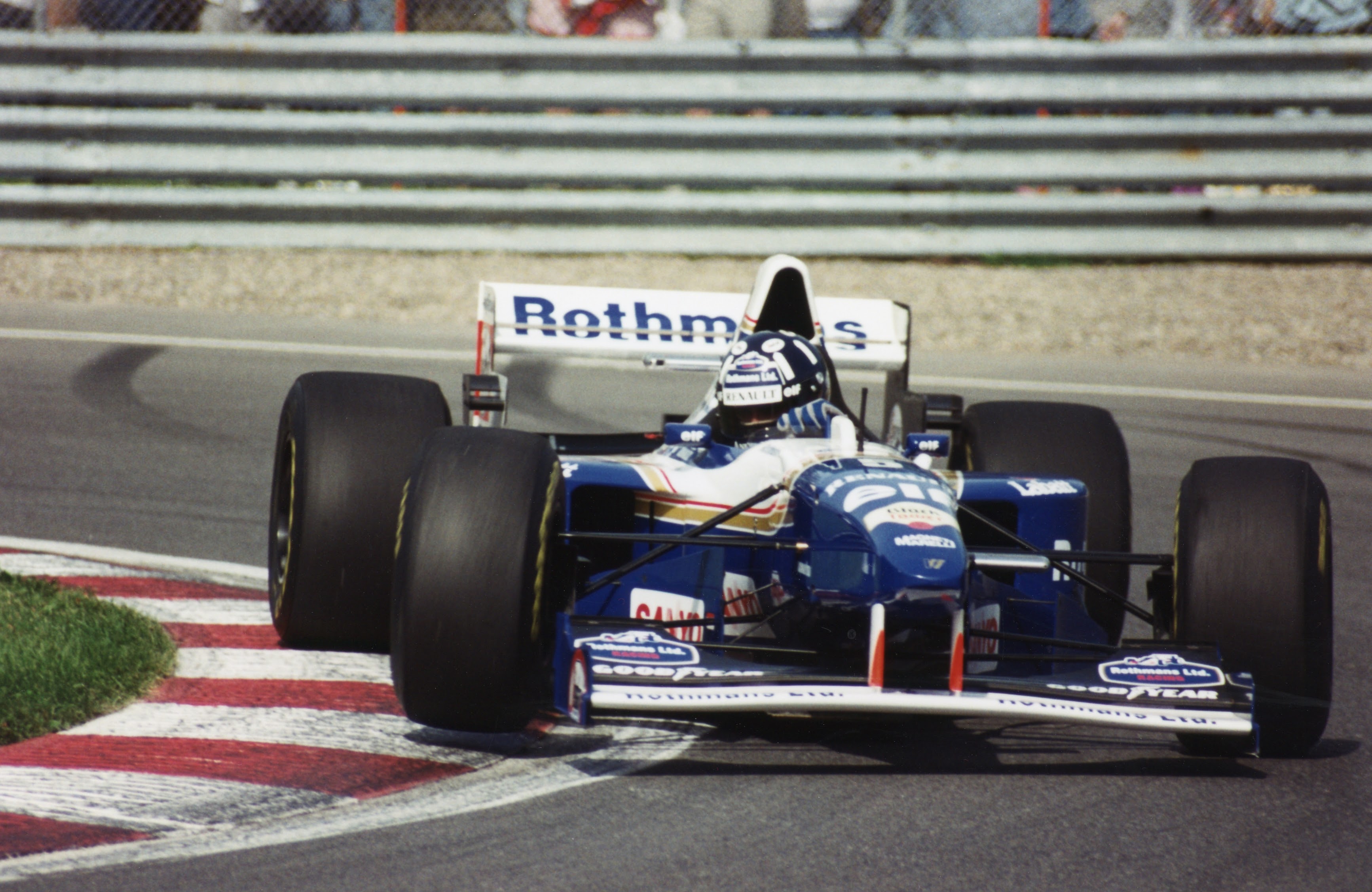 When I began watching Formula 1 in 1996, my brother had already been a fan for a few years. So I knew a bit about the sport. But 1996 was the year I sat down to properly take it in. That was Damon Hill’s championship year, so perhaps it was no surprise that I became a fan.

There were always so many questions you could ask about Damon Hill. Was it a help or a hindrance to have such a famous racing driver as a father? What was the impact of losing his father at such a young age? Why did he start off racing bikes rather than cars? I could go on…

Damon Hill’s autobiography Watching the Wheels provides insight into some of those mysteries. But it deepens others.

The book opens with an explanation of sorts, revealing “the deeper concerns of life, relationships, fears, moral questions, doubts and needs.”

During the promotion of this book, much was made about how Damon Hill had written about depression. Having read the book, I guess this is an angle that the publishers wanted to push. Depression is only explicitly mentioned a handful of times in over 350 pages.

But the early chapters of the book demonstrate an incredible degree of self-reflection, self-awareness and humility. These qualities are rare among any sports stars, let alone world champions.

In particular, Damon Hill shows a surprising degree of empathy with his mother. She had a lot on her shoulders, having to deal with Graham Hill’s demanding profession. This was an era when motor racing was highly dangerous and brought with it the wrong types of temptations.

The impact of his extraordinary early life, and the aftermath of his father’s plane crash, were clearly significant. Damon Hill’s racing career doesn’t even begin until chapter 9, a third of the way through the book. Those early chapters are honest and humble.

During qualifying for the 1997 Hungarian Grand Prix, my dad had his writers’ group meeting at our house. They were all quite bewildered by just how excited this 11 year old was about Damon Hill qualifying 3rd. They didn’t get that this was a season that had — up to that point — been an unmitigated disaster in the uncompetitive Arrows car. They just didn’t understand that this was easily the most exciting event that had ever happened in my short life.

As his book progresses, so does his career. In truth, this is the point at which the book begins to plod a bit. Beyond the odd vivid description of a bike race, and the wheeler-dealing of finding sponsors, Hill’s journeyman junior career was almost literally nothing to write home about.

That makes it all the more extraordinary that he landed a plum job as a test driver for Williams in 1992. Hill helped develop what is sometimes described as the most technologically-advanced car of all time. Williams had perfected the art of active suspension and traction control, just before such electronic aids were banned for 1994.

Exactly this job came Hill’s way isn’t made crystal clear in the book, beyond one anecdote about Patrick Head watching him clinch pole position for a Formula 3000 race at Hockenheim.

This is where the digging deep comes in. Damon Hill had possibly been promoted too soon. Circumstances in the following years would see him have to step up to the plate still further.

In 1998, Damon Hill took the first ever win in a Jordan Grand Prix car at Spa-Francorchamps. My 1:43 scale model of that car is the pride of my modest diecast collection.

The most gripping section of the book comes when Hill describes the tragic events of Imola 1994 and the death of Ayrton Senna. This is one of the most written-about and talked-about events in the history of Formula 1. Damon Hill is in a unique position to speak with authority on the subject, having worked with Senna as his team mate in the months leading up to the tragedy. This alone makes the book worth reading.

Hill knows how the Williams car was behaving. His explanation of Senna’s mindset and driving at the start of the San Marino Grand Prix are enlightening, even if they don’t particularly reveal anything new. It is also well worth reading what Damon Hill thinks about some of the conspiracy theories that surround Senna’s crash.

1994 brought Hill a significant amount of growth in ability and confidence. After the drama of that season, much that follows in the book seems anti-climactic. Even the 1996 world championship year is almost an afterthought. The fact that he lost his Williams seat straight away was the biggest moment of a year not remembered for its gripping racing.

Following some hair-raising anecdotes from his troubled year at Arrows, a somewhat prouder time followed at Jordan. Now there was a big difference from the Hill who had to dig deep in his first year at Williams in 1993. 1998 saw a more self-assured, confident Hill taking a midfield team and helping turn them into grand prix winners.

This is the most self-aggrandising section of an autobiography that is, for the most part, refreshingly down-to-earth. Hill describes how he put his foot down, against Eddie Jordan’s wishes, to make the results come. And didn’t the results speak for themselves?

As we know, 1999 was Hill’s final year as a racing driver, and it was not such a successful year. Meanwhile, the team he had turned into winners became championship contenders with his team-mate Heinz-Harald Frentzen.

Hill’s explanation for his dreadful season is disappointingly lacking in insight. He points the finger at the introduction of grooved tyres. But grooved tyres were in fact introduced in 1998, which was a good year for Hill in the end.

At the height of my fandom, I even took to wearing a Damon Hill baseball cap. It was designed to look like his iconic helmet, with a Benson & Hedges logo prominently displayed. One day when I was playing on the swings in the park, I realised that my GP was with his child on the adjacent swing. I felt a sudden pang of shame that I was walking around essentially advertising cigarettes.

Then there is just one chapter to go, and this is the most disappointing aspect of the book. The last 18 years are given a superficial write-up, even though Damon Hill has done some interesting jobs since hanging up his helmet.

There must be juicy stories from Damon Hill’s time as BRDC president, a job that meant he effectively ran Silverstone Circuit. At that time, Silverstone was in serious danger of losing the British Grand Prix. I was itching to know more. But Hill gives this whole affair just a few paragraphs, scant detail, and a generally glib treatment.

The same goes for his description of his son Josh Hill’s racing career. Josh Hill showed some flashes of promise in the FIA European Formula 3 Championship, before deciding that racing wasn’t for him after all.

Perhaps Damon Hill feels like it is not his place to talk about these more recent events of his life. Perhaps it is all too recent.

Maybe we will have to wait another 20 years for the next installment.

This all comes with the territory of an autobiography, however. It’s Damon Hill’s own prerogative what he writes about.

Despite the grumbles related to my own nosiness, I found Hill’s autobiography an interesting and occasionally gripping read. The humility, empathy and self-awareness demonstrated throughout the book is refreshing and cheering. Damon Hill comes across as a very down-to-earth individual. This book has certainly reminded me why I was such a fan as a child.