F1 in 2015: A dull season with one bright spark and three enigmas

I haven’t written very much about Formula 1 this year. This is mainly because it has been an extraordinarily busy year for me personally, and watching the races themselves has only just about been possible.

But it is also partly because I have begun to lose interest in F1.

In fact, looking back, there was only one post I wrote during the season — and that was about the sad death of Jules Bianchi.

A bad feeling from the start

There was a bad feeling right from the very start. Some teams barely made it to the grid. Sauber were in an unseemly legal battle with its three contracted drivers for just two cars.

McLaren were in the doldrums. At first that seemed to sum up the ill health the sport was in. But seeing the McLaren Hondas rasping around at the back became a more familiar scenario, before becoming a running joke even to its drivers.

I remember Martin Brundle noting very early in the season – possibly even during pre-season testing, but certainly during the Australian Grand Prix weekend – that cars seemed to be finding it more difficult to follow each other. So it proved to be. The racing this year was, for the most part, dire.

Of course, people will point out that “plucky teen” Max Verstappen had no bother at all overtaking when he wanted to. He also had no bother ploughing into Romain Grosjean at Monaco when he misjudged one of his super-brave moves. Verstappen is a very impressive rookie, and we have seen this before.

Young drivers are often the most spectacular to watch. That is precisely because they haven’t yet learned the hard way that in the long run it’s generally better to be conservative.

You need look no further than Lewis Hamilton, who earned similar plaudits to Max Verstappen in his first year. The story of Hamilton’s racing year in 2015 has been of either leading from the front, or of requesting some kind of odd tyre strategy that would magically teleport him into the lead with no effort required. Occasional balls-out racing, yes. But without the sparkle of that debut year in 2007.

Max Verstappen is very talented and very exciting to watch. I hope he doesn’t lose too much of that vim as he gains in experience.

The year the gimmicks stopped working

Beyond that, talking points are few and far between. 2015 felt like the year the gimmicks stopped working.

By now, the engine rules are a complete laughing stock. It is not so much the engines themselves that are the problem. While people may complain about the lack of noise, the engines are technological marvels that should be celebrated.

But F1 has made some mistakes in the way the engines have been brought in. They are costly. Development is highly restricted, baking in the advantage Mercedes have had since day one. The penalty system is far too complicated, making it impossible for fans and even some experts to follow.

Meanwhile, DRS zones have lost their ability even to anger people. Now it’s just sad to watch it all happen. Slam-dunk pass after slam-dunk pass, no defence permitted, supposedly in the name of good entertainment.

Daft tyre rules compound the problems. Even now that the tyres degrade less aggressively, there have still been conspicuous issues surrounding tyre performance, most notably at the Belgian Grand Prix.

The gimmicks brought in during the past few years “to improve the show” have been shown up as a sticking plaster that does nothing to address the root causes of F1’s malaise. A rethink is required.

At present, I am not optimistic that Formula 1 will find a way out of this mess quickly.

But I have watched the sport for 20 years, and I love grand prix racing. I can’t help it.

Even in this difficult season, there are a few things that grabbed my attention. I didn’t have the motivation or the time to write about these during the season, so I will now cover some thoughts in brief.

People will point to the superiority of his Mercedes machinery. But no-one wins a world drivers’ championship three times by accident.

There is something to be said for the manner in which he did it. Hamilton’s off-track life has always raised eyebrows. But this year — at least from an outsider’s perspective — he appeared to be living a wilder lifestyle than ever. It also seemed to do him a world of good. Arguably this makes him the closest to the modern-day James Hunt-style playboy racing driver.

His social media output may attract hoots of derision from some (and I am no fan of seeing him needlessly pose in his knick-knacks on a balcony). But this is all probably fantastic publicity for the sport, and Bernie Ecclestone must be delighted.

Hamilton often appears to have a lot of baggage in his life. That comes across in many interviews, and it has been perceived to affect his racing.
This year, he seemed happier, freer and stronger. Then he won the World Championship, and things seemed to go wrong again.

Lewis Hamilton is a bit of an enigma. There is probably no-one who knows what is truly going on here.

Nico Rosberg likes to play mind games, and he will seek to capitalise on his late season dominance. It tees us up for an intriguing 2016 pre-season. 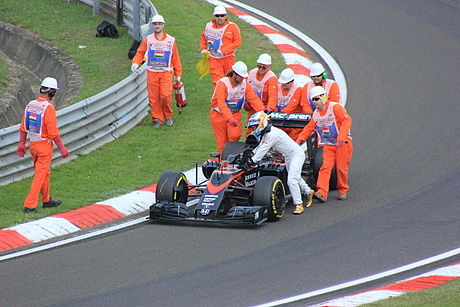 I have written before about Fernando Alonso’s tendency to make bad career choices. This year confirms it. He left Ferrari at just in time for the Scuderia to make an incredible resurgence. The team he joined, McLaren, has endured a real nightmare of a season, and has never been at a lower ebb.

After Alonso left McLaren, he claimed he gave the team six tenths of a second. Now we must consider if Alonso is in fact a cause of unrest within a team.

Historically, he has always struggled when not getting his own way. His resulting sulks have been known to backfire on him.

Even in his championship-winning year of 2005, on the (rare) occasion that Alonso’s team mate Giancarlo Fisichella was ahead of him, the Spaniard was on the radio complaining.

Controversy dogged his season at McLaren in 2007. Not only were relations with Lewis Hamilton and Ron Dennis strained, this was also the year the so-called “Spygate” scandal engulfed the team.

A similarly appalling transgression occurred in 2008 when he was back at Renault. The “Crashgate” scenario took place, and it was later discovered that the team and its driver Nelsinho Piquet conspired to deliberately cause a crash to help Alonso win the race.

No concrete evidence connects Alonso’s actions directly to either of these events. But even when he’d moved to Ferrari in 2009 there was a sense that trouble was following him around.

Before then, it felt like an inevitability that Alonso would win the championship three, four or maybe even more times. Now it won’t be a surprise if he forever remains on two. If you’d told me that in 2007, I would have been shocked — even appalled.

In the interim, Sebastian Vettel has gone on to have the sort of career Alonso was meant to have. Now at Ferrari, the German comes across as more of a leader of the Scuderia than Alonso ever could be. Hamilton also has racked up his third championship.

Fernando Alonso is widely regarded to be one of the most talented drivers on the grid, if not the most talented. But it’s not just the on-track performance that makes a great driver. Alonso’s off-track escapades and bad career choices have combined to cause possibly the greatest waste of potential ever witnessed in F1.

I remember having many great conversations with Fernando Alonso fans from Spain and beyond in the latter part of the last decade. One hears very little from them now, which is a great shame.

Force India extracted the maximum, but what was going on with Nico Hülkenberg?

Force India have long gained a well-deserved reputation for extracting the maximum possible out of the minimum resources. In 2015 they excelled themselves yet further. They have had their best season ever, finishing 5th in the Constructors’ Championship, having used what was essentially last season’s car for the first half of the year.

Particular praise has gone to Sergio Pérez, who enjoyed the form of his life in the second half of the season. This was capped with a podium at Russia, and the rapturous reception he received at the first Mexican Grand Prix in 23 years.

More confusing was Nico Hülkenberg’s performance. This year he unexpectedly won the 24 Hours of Le Mans, one of the greatest achievements in motorsport. Yet his Formula 1 performances were disappointingly patchy. I say this as a fan of Hülkenberg: I can’t understand where he’s at any more.

For years he has been the go-to driver for people to bring up when a slot at a bigger team might open up. There is always a sense that Hülkenberg could have achieved a lot in F1, just as long as he was in the right car.

His record in other series has been superb, with dominant spells in A1GP and Formula 3. He has also taken a convincing GP2 championship win, in his debut full season, which is a real rarity.

Hülkenberg has had some strong showings in F1 too. Looking at his results, it’s the consistency that stands out. Pole position at Brazil in his debut year was another massive achievement.

But what you also notice is that he has not ever had a really massive result. He’s never finished on the podium. Compare to Sergio Pérez, who has had five — two of which have come while he has been Hülkenberg’s team mate.

Moreover, he has had some shocking incidents in F1 this season, including some avoidable crashes. These days you don’t see supposedly top drivers crashing into other cars too often, so it was disappointing to see Hülkenberg do it multiple times this year.

One wonders if this is why he has never been picked up by a bigger team, rather than any conspiracy to do with his height. I have heard it said (although I’m afraid I cannot remember where) that Sauber even tipped Ferrari off that Hülkenberg was disappointing when he drove for them.

So Nico Hülkenberg is another enigma, like the other drivers I have written about here. He seems to be talented, and has achieved some incredible things. But why is true success in F1 eluding him?