After years of dilly-dallying, I have finally bought myself a new record player. I own about 70 records. But until this year I didn’t have anything decent to play them on.

I used to have a crappy hi-fi that was bought from Argos 15 years ago. When I bought my first few records back in the day, this satisfied my needs. That was until I bought a record where I knew what it was supposed to sound like. Then I realised that my hi-fi noticeably played everything too fast (about 3% too fast, as I recall).

I used to transfer my vinyl onto digital formats by plugging an iRiver MP3 player, which had recording functionality, into the headphone jack. I have lived with many of those files ever since. But they all had a barnful of surface noise, and they sounded tinny, as well as all being too fast.

Over time, I came to realise that it was no good.

About halfway between then and now, I bought a USB turntable. It was significantly better, but only really for transferring my records to MP3s.

For a long time I’ve planned on buying a decent system to enjoy my records properly. When I received a very kind leaving gift of Autechre vinyl represses when I switched jobs earlier this year, that took me a step closer to buying one. 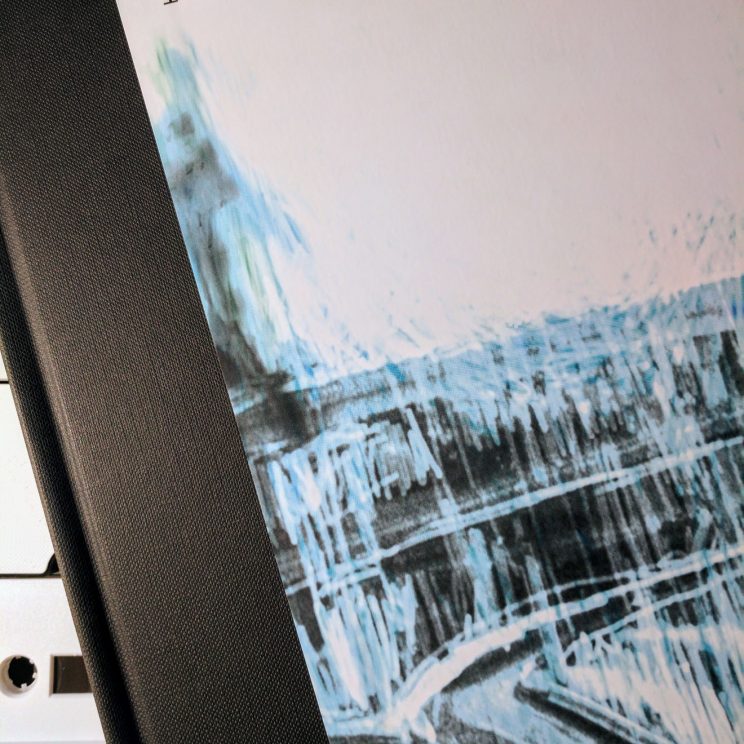 But the final straw came when Radiohead announced a 20th anniversary edition of OK Computer. I went all-in and bought the super fancy boxed edition.

It seemed absurd to have a decent collection of records and spend £100 on a new one, yet not have a proper system to play them on.

So off I went down the rabbit hole. I began the online research. But the options were dizzying to me as a relative newbie. So I went into my local Richer Sounds to speak to someone about it.

In fact, they wanted to piece together a complete turntable from three open boxes, all of which were incomplete. I didn’t fancy that!

It’s probably daft, but I wanted the turntable to look and feel good. I stopped short at getting one with a carbon arm, which my brother has. It’s meant to reduce the amount of vibration transmitted through the arm, but I think it’s mainly there because it looks cool.

I ended up getting the Pro-Ject Essential III. It took me a while to get it set up… but perhaps that’s part of the fun?

As a result, I ended up spending about £200 more than my original £500 budget. It’s a lot more money than I would have considered spending a few years ago. All the more odd considering I have less and less time to listen to music.

I have placed Alex under strict instructions not to let me become an audiophile. But I’m feeling the transition happening.

Perhaps the logic is that if I have less time to dedicate to it, I may as well make it quality time. One pleasant side-effect is that I am making myself find more time to listen to music.

For years, I have almost always listened to music while concentrating on something else. Now I am focusing on music again. I have definitely been missing out.

The first record to get a spin was that reissue of OK Computer. It sounded sweet.

As for the Autechre re-presses, 16 years on from buying Tri Repetae on CD, I can now finally listen to it complete with surface noise.

Now I am slowly making my way through all those records I have bought over the past 15 years. I am discovering how much detail I have been missing out on from those records I transferred to MP3 from the dodgy old hi-fi. Music I thought I knew well has really been given a new lease of life.

Comparing vinyl to CD, I am still not entirely convinced that vinyl provides the superior sound quality. In some senses it does sound more open. But even with the setup much improved over my crummy old hi-fi, there is still surface noise, and I find some fuller electronic sounds seem distorted.

My copy of A Moon Shaped Pool also has a nasty sound during True Love Waits (a quiet, melancholic song that could really do without having a nasty accidental noise in it). I can’t see anything on the surface of the vinyl, and cleaning the record hasn’t done the trick. Perhaps it’s an issue with my copy, or just one of those things. But it is a tad annoying.

What I will say is that listening to vinyl is a wonderful experience. There is a ritual to it that appeals. Carefully extracting the record from its sleeve. Placing it on the turntable. Gently dropping the needle. Anticipating turning it over. Poring over the beautifully-sized artwork, which is just so much more immersive than most CD packaging.

I can’t say I will begin buying vinyl over CDs though. This probably marks me out as distinctly odd (I do imagine I’m being judged a little bit when I look in the CDs section of small record shops). But I still think a well mastered CD provides the best listening experience that a physical format can offer. Plus, they are about a third of the price of records at the moment.

But for a certain type of album, vinyl has to be the definitive way to listen. I can’t believe it’s taken me this long to start doing it properly.