For new year Alex and I took a trip to Italy. We spent a few days in Rome before taking the train to Venice, which I will cover in a future post.

As we were staying over new year, some aspects of our trip to Rome were difficult to plan around opening times. It is a funny time of year to go traveling. You get all the disadvantages of winter – cold weather, short days – without the reduced prices.

But you also get an awesome new year experience. How can you say no to seeing fireworks projectile-shooting out of a 2,000 year old world heritage site as if it didn’t matter? It certainly beats spending new year with Jools Holland and his pre-recorded hooty tooty boogie woogie show. 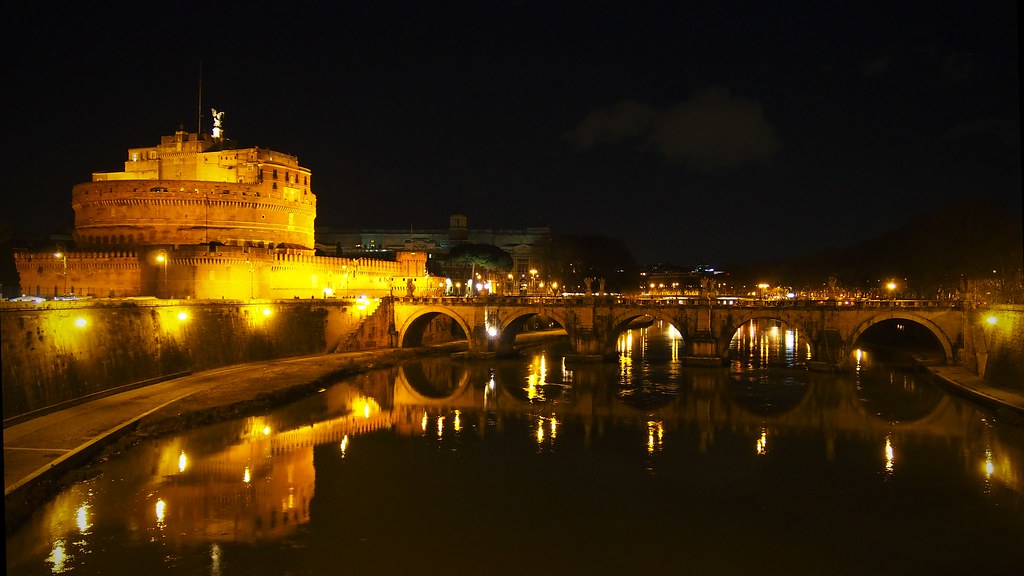 But the challenge of cramming everything into a short city break is doubled at new year. The sign of a good city trip is feeling like you didn’t have time to do everything you wanted to do. On this basis, the visit to Rome was a roaring success.

However, the guilt of knowing we could have packed more in won’t shake easily given that we essentially visited two places twice. It is unfortunate, but it was the only way we could work it out. 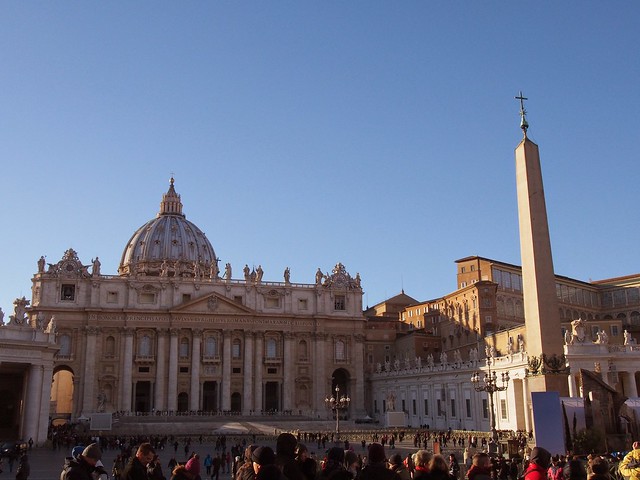 Our first outing was to the Vatican City. There was an absolutely enormous Christmas tree in the centre of St Peter’s Square. It seemed as though they take Christmas pretty seriously there. 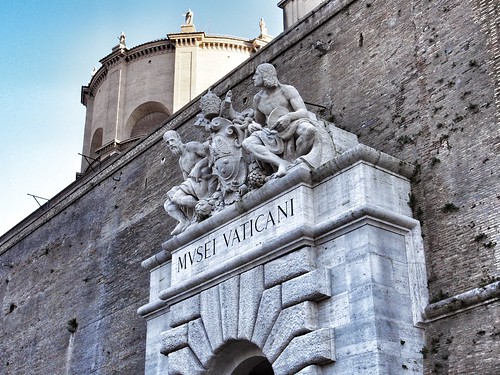 The weather was chilly and the queues were long. We ended up signing up to a tour that promised we could skip the queues and see the museums, the Sistine Chapel, the whole shebang. A slightly shifty-looking character approached us in the queue and invited us to go on their tour, for the price of something like €90.

As we signed up, Alex turned to me and whispered, “Are we being scammed?”

“I don’t know!”, came my reply. The fear was that we were approached because we looked gullible and British enough to fall for something daft like that. It wouldn’t have been a good start to the holiday for our first transaction to be a scam.

Suspicions were raised further when the beginning of the tour was entirely based outside the Vatican City. We skirted round the perimeter, peering in from the outside.

Eventually it became clear that the tour was quite legitimate. We did indeed skip the queues and we saw the big hitters. It may have been quite pricey, but it did make things a bit less stressful for us on our first day. The tour was by When In Rome Tours. 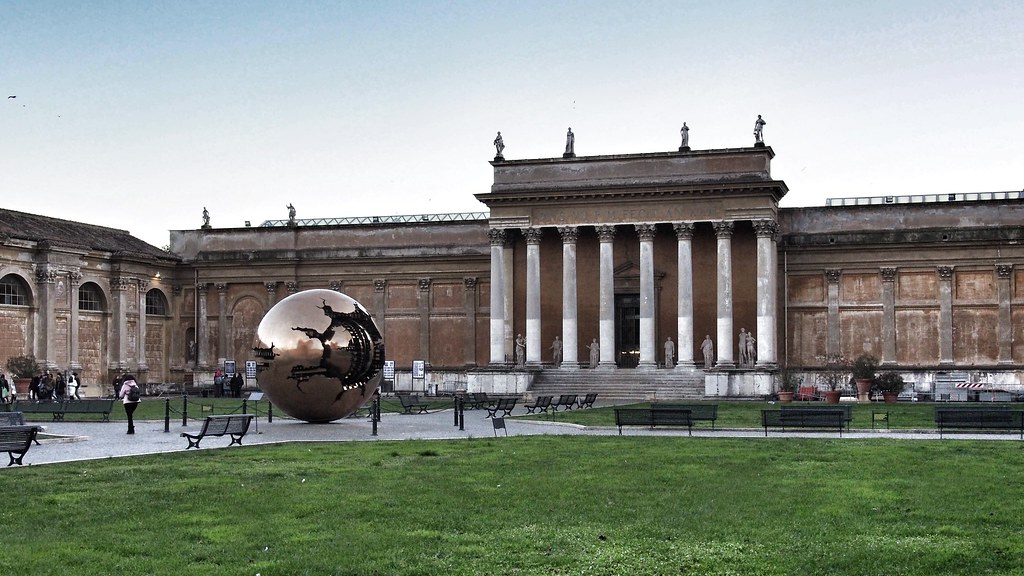 It goes without saying that the Sistine Chapel is pretty special, but it was so full of people that it was difficult to fully appreciate. Noise is meant to be prohibited, but when a room that size is more or less full it becomes a futile exercise. The place was awash with a white noise of murmuring. But what can you do? 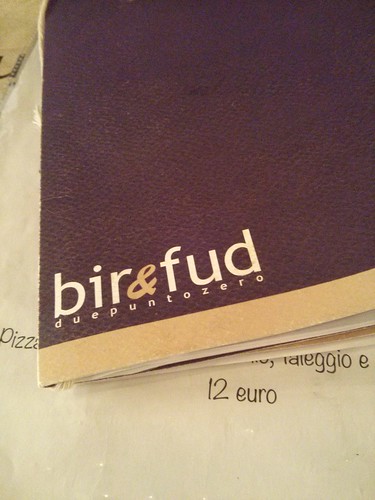 Our apartment was in Trastevere, a medieval area that in the modern era has become a bit of a nightlife hub, with many pubs and restaurants.

My brother had recommended we try out Bir & Fud, which was handy for us as it was just round the corner from where we were staying. Can you guess what Bir & Fud serves?

As we wandered in looking like lost tourists, the man at the bar asked if we were there for beer. To which Alex’s snappy reply was: “…and food?”

Food wasn’t due to be served for another hour or so. Not to worry, it just meant more time to drink beer!

We were staggered to see some beer from Fyne Ales on sale. We had just been at a Fyne Ales tasting in Dundee a few days before. Of course, we opted to have Italian beers instead. 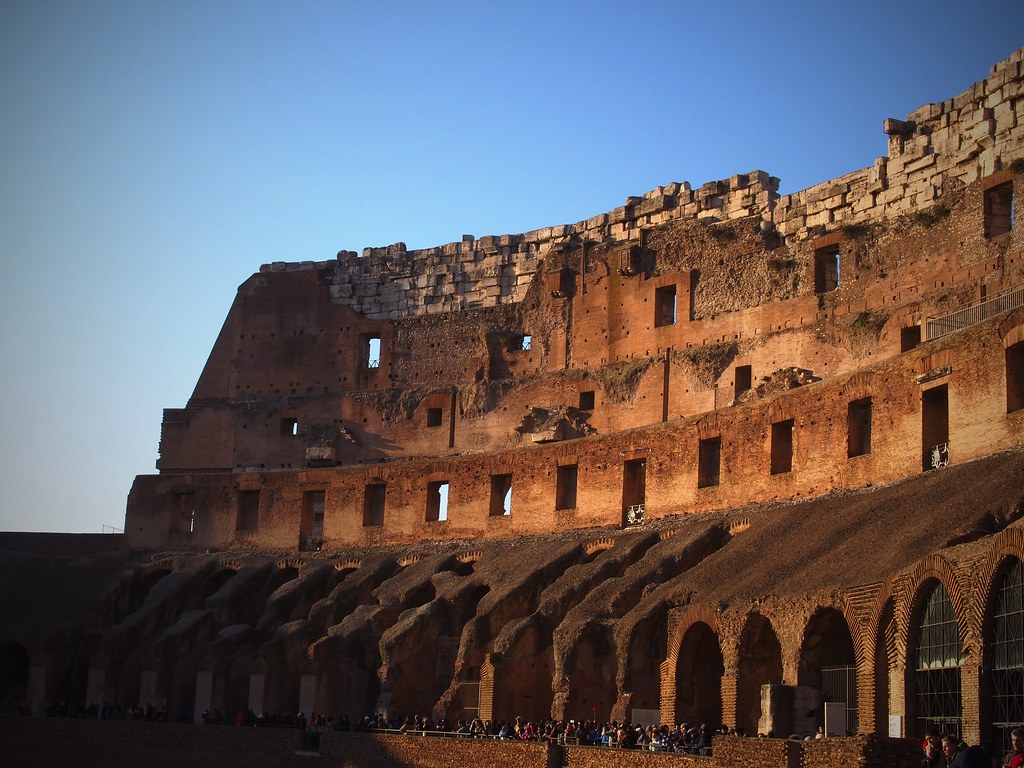 The next day we took a wander round Rome, with our ultimate destination being the Colosseum.

It is quite something to be in a building that is almost 2,000 years old but has such scale. The scale is very similar to that of a football stadium, so it is easy to relate to the purpose of the Colosseum. 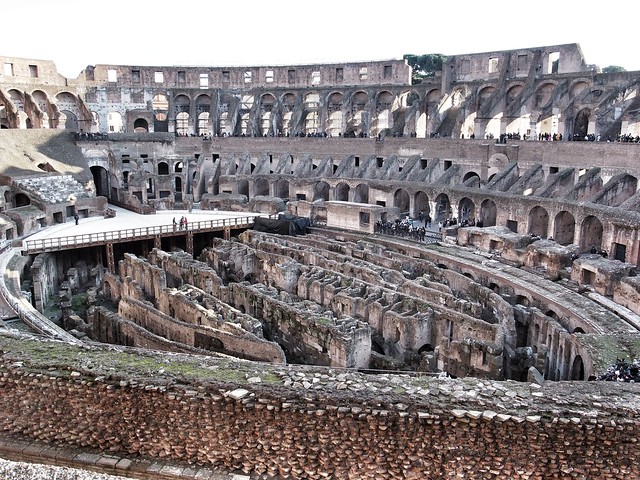 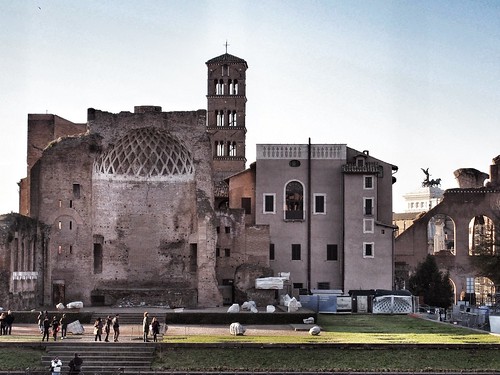 When wandering round Rome it is not unusual to just happen upon just another massive Roman ruin. There is no mistaking that Rome was once a major economic and political force.

I couldn’t help but wonder what citizens of the Roman Empire would make of Rome today. It is no longer the force it was, but the legacy of the heritage is a massive gift from the past. 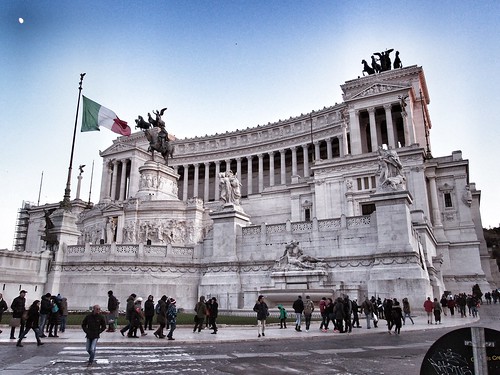 Afterwards we took a further wander and found ourselves at Altare della Patria. To the untrained eye – like mine – it may look like another ancient building, albeit a particularly large and well-preserved one.

But the building is in fact less than 100 years old. Like many modern buildings, it has attracted great controversy.

Its architecture resembles Greek more than Roman style. The material it is made out of is not local either, which means it weathers differently to other buildings. Neighbouring buildings become brown over time, but this building remains conspicuously white.

In short, it is a great big fake. Apparently some locals call it pisciatoio nazionale (the national urinal). The building is massive and ostentatious. But to my mind it was still spectacular to see, even if the design is a bit tasteless.

New year’s eve at the Colosseum 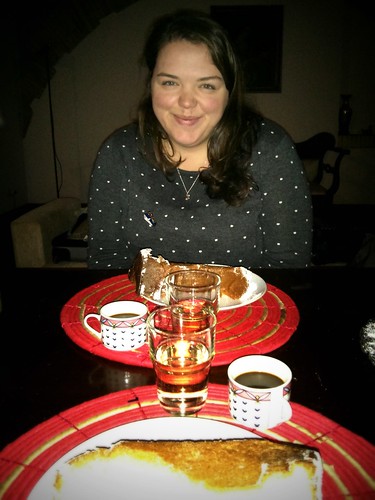 We touched base back at the apartment for a much-needed rest and some prosecco and panettone, a gift kindly left for us by the owners of the apartment.

To see in the new year we opted to go back to the Colosseum. There was a pretty large crowd, although half of them were selling selfie sticks and light-up neon horns for a euro a pop.

We knew that the fireworks at the Colosseum would be pretty special, but we weren’t sure where the best vantage point would be. We opted to stand at a verge on the south side of the Colosseum, where less of the outer wall is intact. Our thinking was that we would see more of the inside, and therefore more of the fireworks. 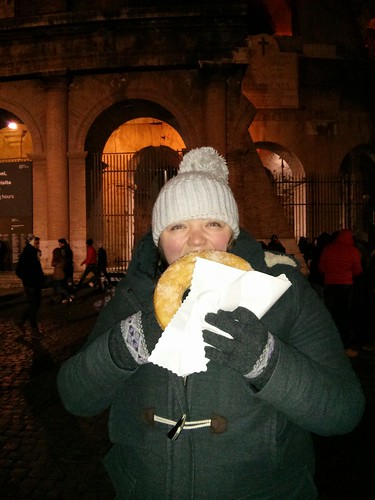 Alex and I had a colossal doughnut at the Colosseum.

More fool us, because it appeared as though almost all of the fireworks were coming from the other side of the Colosseum, and we couldn’t really see them.

As midnight fast approached, we made a run for it towards the Arch of Constantine to try and get a better vantage point. I think we failed to see the majority of the fireworks from the Colosseum. But there were plenty of fireworks coming from a nearby area. Having them framed by the 1,700 year old arch was pretty special. 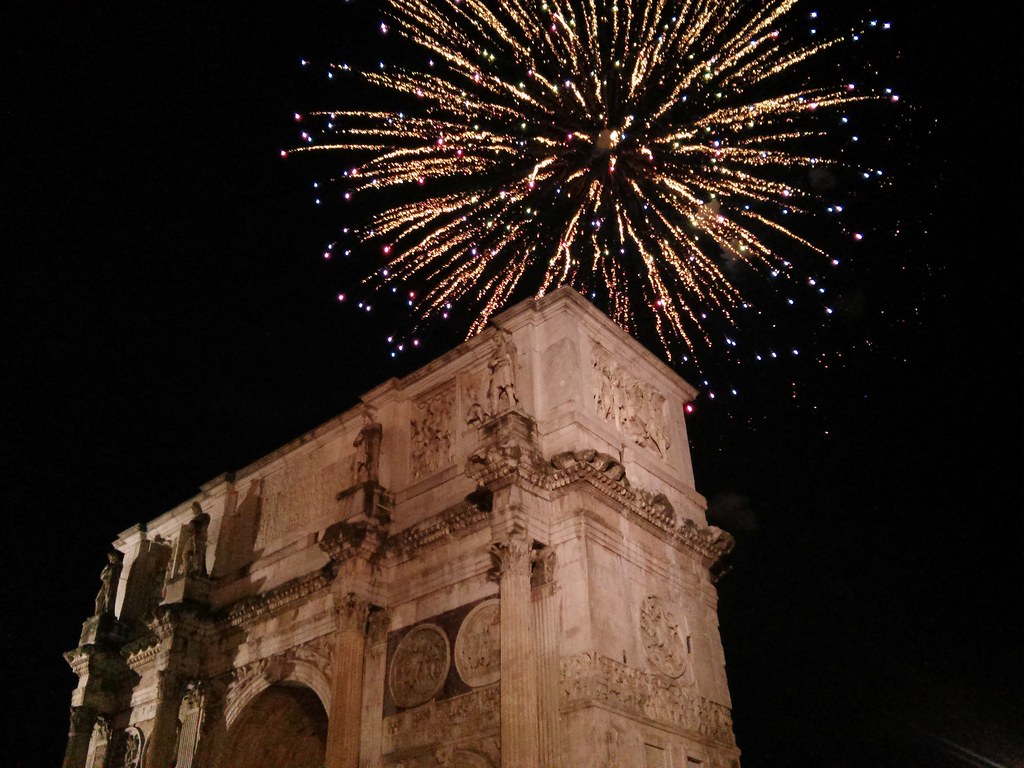 While attempting to make our way back, we were caught in a slightly worrying crush. We observed that there didn’t seem to be many officials around.

The next day it was on the news, and it became a major political issue. 83% of Rome’s police officers called in sick that night. What a coincidence.

On new year’s day we decided to go back to the Vatican City to see the pope give his new year’s address. There was a large crowd and a festive atmosphere, although it was not as crowded as I was expecting. We might have been in the world’s smallest state, but St Peter’s Square is pretty large.

We squinted at a tiny window that was inconspicuous apart from the flag hanging from it. It was so small, we thought, surely he is not going to speak from that. Then he emerged, and it turned out the window was not small at all. It was just far away.

More bits and pieces of Rome 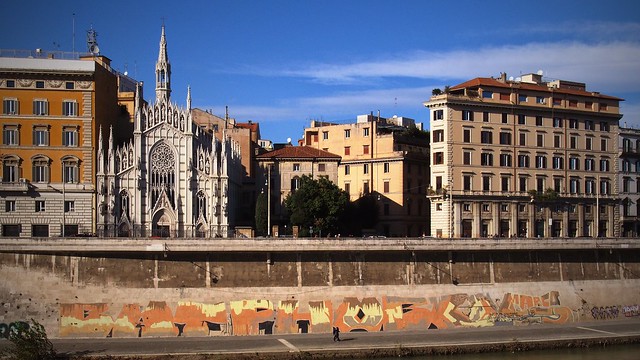 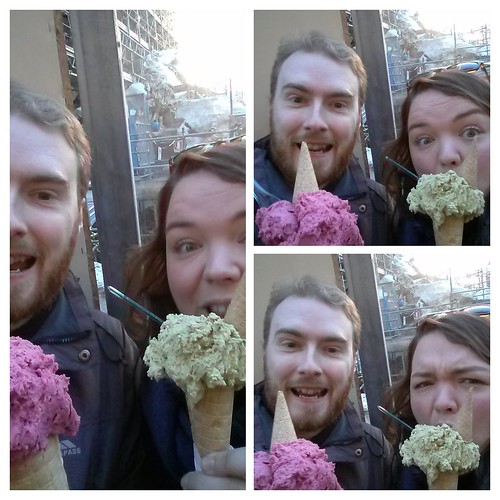 It was our last day in Rome, so we took a whistle-stop tour of some more places we want to see. Being new year’s day, many places were not open. So it was more of a walking and looking at things day.

Among the landmarks we saw from the outside were Castel Sant’Angelo, Museo dell’Ara Pacis, the Spanish Steps and the Pantheon.

We also went to see the Trevi Fountain. It is currently undergoing a major renovation, so is not operational and is covered in scaffolding.

We did however get some amazing gelato from an adjacent shop.

As the afternoon drew in we made our way to an MC Escher exhibition at Chiostro del Bramante. It cost €13, and we had to queue almost an hour to get in after buying our ticket.

Despite the long wait, it was still rather busy inside. We are not sure if it was because it is (rightly) a popular exhibition, or if it was just because it was one of the few places open on new year’s day.

Whatever, it was well worth the wait. The exhibition was huge, featuring dozens and dozens of Escher pieces. We spent well over an hour inside, and I could have happily spent longer. It felt like a real privilege to see this artwork.

If you happen to be in Rome, this exhibition is on until 22 February. I would highly recommend it. 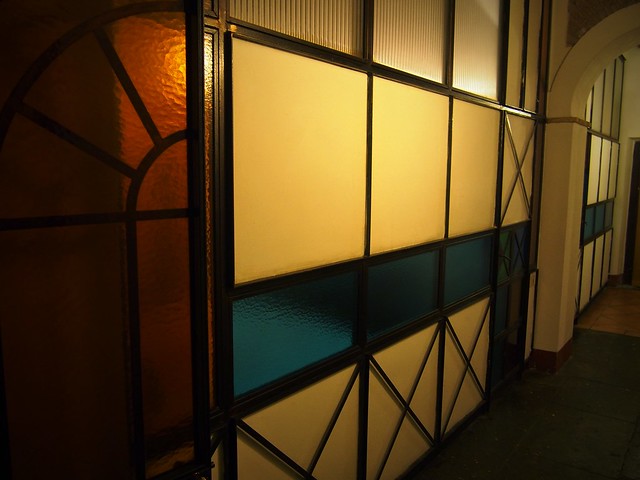 Remaining on the art theme, I have to mention the Mondrian-themed apartment we stayed in. Casa Mondrian al Moro in Trastevere is brilliantly located near the centre of Rome. We walked everywhere, and Trastevere itself has lots of great bars and restaurants.

But best of all, the apartment was very well presented with Mondrian-inspired glass decor. It had great furniture and was very spacious. Two couples could very comfortably stay there.

It was the first time we had used Airbnb, and we were delighted.

The next day we took a train to Venice. Keep your eyes out for my post about that later this week.

View my full set of photos from Italy →
4 comments