Header images of McLaren and Williams by Artes Max.

Five years ago I wrote an article titled McLaren and Williams troubles cap a decade of underachievement. 2013 was a notably tough year for both teams, who were both titans of a bygone era. Then, I noted that neither team showed any sign of returning to winning ways soon.

The intervening years have seen mixed fortunes at best. Once again, 2018 sees attentions focused on McLaren and Williams for all the wrong reasons. 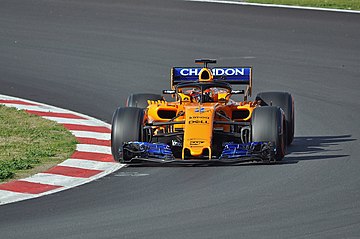 Five years ago, my article noted that McLaren seemed certain to split with their long-term engine partner Mercedes. They duly forged a new partnership with Honda. But it was an embarrassing failure, and after three painful years it ended in divorce.

The dawn of their new relationship with Renault has not been as smooth as McLaren hoped. Pre-season testing was riddled with the sort of problems that McLaren had been blaming Honda for.

Moreover, McLaren are lacking pace relative to other Renault-running teams — Renault F1 themselves and Red Bull Racing. This casts immediate doubt on McLaren’s bombastic claims that they had one of the best chassis in F1, if only the sluggish Honda powertrain would let them show it off.

Only time will tell if reliablity problems continue to dog the Honda project. On the down side for Toro Rosso, both cars had to change power unit elements after the first race, following a lacklustre opening round where they lacked both pace and reliability. Grid penalties seem a near certainty for most teams, but they are likely to come sooner for Toro Rosso at this rate.

And in fairness to McLaren, although their car appears to lack pace, after two rounds they are 3rd in the constructors’ championship. Fernando Alonso is an impressive 4th in the drivers’ championship — ahead of the Ferrari of Kimi Räikkonen.

These positions are a reward for relative consistency in being able to achieve semi-decent results, in two races that have seen mixed fortunes for most. But they also hint at a heavy dose of luck. Few would argue that McLaren hold these positions on merit.

An ’emergency meeting’ immediately following qualifying in Bahrain — and a subsequent structural shake-up — demonstrates that McLaren’s owners know they need to make improvements fast if they are to avoid terminal decline.

Williams propping up the field

Following my last article on this topic five years ago, Williams have in fact had some relatively good times. After securing the Mercedes engines that McLaren eschewed, they took 3rd in the constructors’ championship in two consecutive years.

Since then, Williams slumped back into the midfield as Ferrari and Red Bull Racing got their act together, and the lean Force India began to punch above their weight.

This year, Williams appear to have hit rock bottom. Their new car is slower than last year’s car, and they are firmly at the back of the field. Their new driver Sergey Sirotkin said “we look like idiots” after their disastrous race in Bahrain.

Perhaps most worryingly, Williams’ new technical director Paddy Lowe appears at a loss to explain why his first car for the team is so slow.

Paddy Lowe was a high-profile hiring for Williams, having been poached from the dominant Mercedes. Upon joining Williams, he became a shareholder and joined the board of directors.

Meanwhile, Williams have probably the worst driver line-up in the field. Lance Stroll and Sergey Sirotkin are both young and inexperienced. Neither will be in a strong position to give good feedback on where their new car is going wrong.

This is typical Williams behaviour. Throughout their history, they have emphasised engineering expertise and treated their drivers as interchangeable components — almost as worthless commodities.

Williams have rarely had strong drivers. Yes, Ayrton Senna drove for them. Yes, Nelson Piquet and Alain Prost won championships for them.

But the roll-call of other Williams champions is hardly a who’s who of F1 stars. They are the sort of drivers who won by a bit of a fluke (Keke Rosberg); who made up for a lack of raw talent by grinding out workmanlike victories (Damon Hill); who could simply feel thankful to have had by far the best car in the field and a slightly crappy teammate (Jacques Villeneuve).

That worked in the 1980s and 1990s when a single superstar engineer could have a heavy influence on the success of a car. But in modern F1, teams have massive workforces. The car’s speed is more a function of teamwork and structure than the ideas of one boy genius.

But despite the widespread changes F1 has seen in the past few decades, Williams have only doubled down on their bad habit. Only this team could look at the driver market and say, “We should hire a pair like Lance Stroll and Sergey Sirotkin. Paddy Lowe’s engineering genius will see us through.”

Incidentally, it hardly seems as if Mercedes are missing Paddy Lowe.

Even the smaller teams that raced in F1 from 2010 until fizzling out tended to try to hire more experienced drivers to mentor their young guns and pay drivers.

Williams’ shocking start to the season is attracting far less attention than McLaren’s actually-not-bad start. But I think the situation at Williams is far more worrying.

At least McLaren have planned a way to improve. They have shown a willingness to make radical change. Their post-Bahrain speedy restructure may look like panic. But it may also just be the decisiveness they need.

Meanwhile, Williams sound like they don’t even know how to begin solving their problems. They don’t even seem to know what the problem is.

Dieter Rencken on RaceFans teased an interview with Claire Williams that took place after qualifying in Bahrain:

[T]he big take-away from the chat is that just maybe Williams needs to critically examine its modus operandi. The world of F1 has changed massively over the past 40 years, yet Williams ploughs fundamentally the same furrow as it did in 1978.

For one of Formula 1’s proudest teams, this is a major test of their whole approach towards building cars, and even their reason for being.