Town planners in the mid-20th century faced a big problem. Cities were growing at an unprecedented rate, and not just with people. The advent of the motor car brought increased congestion and safety risks.

The solution town planners frequently pursued was to separate vehicles and pedestrians by placing them on different levels. Different schools disagreed on whether the cars or the pedestrians should be elevated. Nevertheless, the idea gave rise to utopian futuristic visions of what an urban area could be.

The need to redevelop urban areas following the second world war gave planners and architects a unique opportunity to shape the urban environment along these idealistic lines. 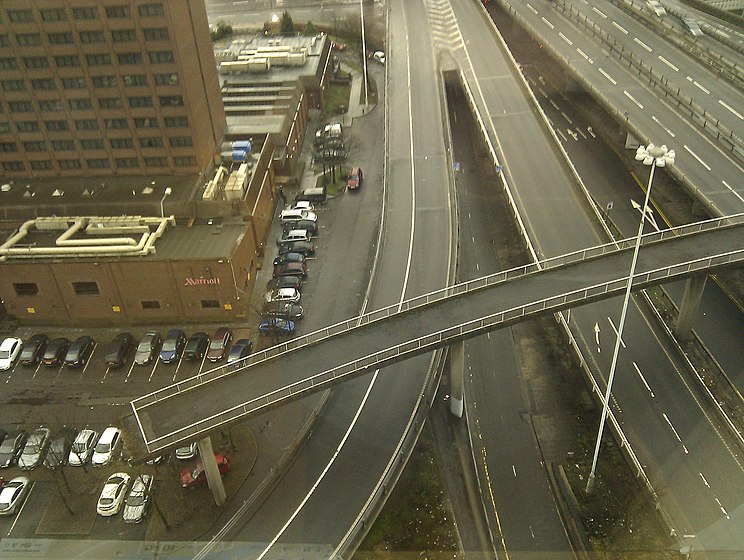 Compare Glasgow to Edinburgh. In Glasgow, the M8 rips through the centre of the city. It ripped up communities in the process. Originally planned to be a ring road, it was left incomplete and abandoned in 1980. This left loose ends such as the famous bridge to nowhere.

Edinburgh resisted the temptation to rip out large parts of the city to make way for cars. This was partly because it didn’t get destroyed as much as some other cities during the second world war. This gave planners less free space to play with.

Some staggering plans of an inner ring motorway that almost got approved outline a parallel universe. One in which a tunnel goes through Calton Hill, Inverleith pond has been filled in, and the Stockbridge colonies sit in the shadow of a motorway on stilts.

A Glaswegian recently told me that Edinburgh lacks proper roads. But these plans demonstrate what Edinburgh would have lost if it had caved in to the car.

However, remnants of Edinburgh’s sixties segregated dream are still to be seen, if you know where to look.

Princes Street may be part of the New Town, but by the 1950s it was no longer new. The fact that buildings lie only on one side of the street was seen as a disadvantage, because it limited the amount of retail space available. It was proposed that its hodgepodge of inconsistently designed buildings would be replaced by brand new constructions allowing access at two levels.

Look carefully, and you can see where certain buildings constructed around this time incorporated the proposed first-level pedestrian walkway. Boots and the former BHS are two examples. But like Glasgow’s inner ring road, this plan was ultimately abandoned in the early 1980s.

In the City of London, a far more ambitious plan would have seen the creation of a 30 mile long network of first-level pedestrian walkways known as the pedway. They were able to be more ambitious in their vision, because the devastation wreaked by the second world war was greater.

The most fleshed-out and well-known part of the pedway, even if most people don’t know it was meant to be part of a larger network, is the Barbican estate. In many ways, the Barbican is an exceptional example of successful brutalist architecture. Its section of the pedway is one of those unusual successes.

However, few people ever knew about pedway because it was part of still grander plans that would have involved wider redevelopment of parts of the City. It was developed in a largely piecemeal fashion. Much of the pedway was built by developers as and when buildings were erected, as a condition of the planning consents.

They were always intended to be public rights of way. But by being privately built, intertwined with the buildings they were attached to, and often leading to nowhere because the other side didn’t exist yet, they never felt like public rights of way. Diamond geezer notes that one pedway abruptly “ends intrusively beside a second floor meeting room”.

This public-but-private nature meant a legal ambiguity was created. The police were apparently unsure what powers they had in the pedways (see Michael Hebbert, p. 445). That was a bit of a problem, since walkways like this tended to attract crime.

Maintenance also quickly became an issue. Who would clean them? Who would fix the lighting? Such jobs were more difficult and more expensive than in ground-level streets.

The fire brigade also had difficulty accessing parts of the pedway in order to fight fires. They struggled to find appliances that would fit. Even importing a special lightweight appliance from Austria failed. This was partly caused by the fact that the developers designed their pedways to the minimum standards, making them as small and narrow as they could get away with.

This feature also points to a major flaw in the whole idea: accessibility. Not everyone can climb stairs to ascend a level. According to Michael Hebbert (p. 445), until the 1990s there was only one escalator and one lift in the entire network.

Of course, this restriction didn’t just cause people with disabilities not to use the pedways. Most people avoided them entirely. After all, why climb a level if you don’t have to?

As Michael Hebbert said in Chris Bevan Lee’s excellent documentary Elevating London (25:17): “Human beings are like water. They will always flow to the point of least resistance.”

That means they usually prefer to walk at ground level. It was found that, even when a pavement at ground level was not available, people would sooner walk on the road than climb a level.

Like the other schemes described above, the ambition of the pedway was scaled back in the 1970s, before eventually being abandoned in the 1980s.

The thinking behind vertically segregating vehicles and pedestrians can be traced back to at least 1931, when New York’s Regional Plan Committee considered elevated walkways as a way of alleviating congestion (Hebbert, p. 433).

But the idea of elevated walkways was in fact not new in the 20th century. Think of Venice. In fact, the 1931 New York proposals referenced Venice as an inspiration for the idea.

However, the vision did rely on an naively romanticised view of the motor car.

…the whole aspect becomes that of a very modernized Venice, a city of arcades, plazas and bridges, with canals for streets, only the canal will not be filled with water but with freely flowing motor traffic, the sun glittering on the black tops of cars and the buildings reflected in this waving flood of rapidly rolling vehicles…

The idea that the sun reflecting off cars would create a shimmery substitute for a riverside, with pedestrians pleasantly mingling above, could only have come from from a time before motor vehicles truly took hold. Ditto the notion that traffic would be “freely flowing”. A few decades later, cars were a byword for congestion, pollution, noise and stress — nothing like the relaxing vision imagined in the 1930s.

In 1963, the Ministry of Transport published a highly influential report called Traffic in Towns. It foretold of the undesirable consequences of an increase in the growth of traffic (which, believe it or not, the report significantly overestimated — remember that the next time someone tells you no-one ever imagined there’d be this many cars on the roads). But it also warned of the dangers of going all-in on one solution:

We have found it desirable to avoid the term ‘solution’ altogether for the traffic problem is not such much a problem waiting for a solution as a social situation requiring to be dealt with by policies patiently applied over a period and revised from time to time in light of events.

Nonetheless, according to Hebbert (p. 434), vertical segregation became “received wisdom” in time for the post-second world war building boom. Says Hebbert (p. 434): “The resulting environments are some of the most hated and unmanageable in urban Britain.”

The more desirable solutions have become clear some decades later.

Firstly, it was a mistake to encourage so much vehicular traffic into cities. London introduced a congestion charge in 2003. Towns and cities are slowly finding other ways of discouraging traffic by creating pedestrian precincts, adding speed bumps and reducing speed limits.

Beyond this, the true solution is counter-intuitive. But the clue came when people walked on the roads rather than use the pedway. This was the desire path.

While town planners spent decades trying to segregate cars and pedestrians, it has turned out that having them share spaces is more effective. Schemes like Hans Monderman’s squareabout bring pedestrians, cyclists and motorists closer together. This makes everyone look out for each other. It’s turned out to be safer.