Last weekend I went on a “passenger drift experience” at Driftland UK in Lochgelly. I kindly received this as a leaving gift from my former colleagues at the University of St Andrews digital communications team.

It was hard to find our way there. There were no signposts that we could see. We made our way past a massive but suspiciously quiet commercial building, beyond which may as well have been the edge of the world.

But down the end of the road and round the corner, we finally stumbled across it. On arrival, Driftland was a hive of activity; a buzz of noise, a cloud of tyre smoke, a stench of burnt clutches. This full-on sensory assault made us feel a bit daft for having been unable to find it from round the corner.

I must be honest: It’s not quite what I was expecting. I was imagining that there would only be one car on the track at a time. Having multiple cars in close proximity seemed to add to the… er, excitement.

I cheerfully signed a bit of paper that mentioned words like injury and death, and exchanged it for two tickets to the passenger seat of a heavily modified car.

There were two cars to choose from — a Nissan Skyline and a BMW M3. I took one ride in each.

The Skyline didn’t feel like much more than a normal road car as I sat down. I was buckled in with a standard seatbelt, and before I knew it we were off.

We were told in our safety briefing that we would go into the first corner feeling like we were going 30mph too quickly. Having accordingly braced myself, the first lap didn’t seem so bad. Emerging from the S-bend, we swept sideways through a long straight with a large wall on the outside. That was rather exhilarating.

Having got through the first lap with glee, and always feeling rather safe, I felt that there would be nothing to worry about.

Then we spearheaded straight to the first S-bend, where a car already was. I instinctively grasped the seatbelt, probably thinking it would help me avoid decapitation in the event of a sudden stop. Of course, these drivers know what they are doing and the other car had moved on before we reached it.

Another lap, and we were done. There was rather a lot of smoke in the car by that stage, and it was clearly time for it to be checked over. 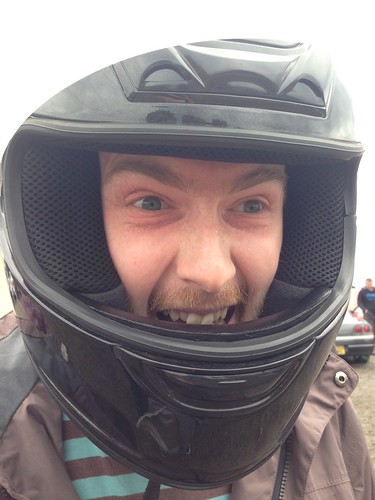 Before the first ride, I was pensive. I wasn’t entirely sure I would enjoy it.

I need to confess: I was at a cheese and wine event the night before, and I may have had too much cheese. I have certainly had better mornings in my life. I was a bit worried about what I might do to the car, never mind what the car might do to me.

But by the end of that first ride I was disappointed that it was so short. It was was a great thrill, and no change of pants was required. Now I was wired up and eager to go round again.

I waited for my next ride, this time in the M3. I was pleased to find myself in the right place in the queue for the white and green one, which was definitely the coolest looking.

This felt much more like a racecar than the Skyline. With a rollcage, a good seat and a harness, it felt a great deal safer and more fun.

This time, we spent the first half of the run more or less directly behind another car, until it spun to a stop in front of us. The presence of other cars is definitely what gives this drifting experience the edge.

It is one thing to contort a car through an S-bend and sweep it alongside a wall. It is quite another thing to be in the presence of another car when you don’t really know what it’s going to do.

It was all over a bit too soon. I’m not sure I would do it again, but I am definitely glad I did it once. Many thanks to my former colleagues for the kind gift. And — despite my odd glib remark in this post — I should point out that the staff at Driftland were all very professional and safety conscious.

Thanks to Alex for taking the photos and videos.