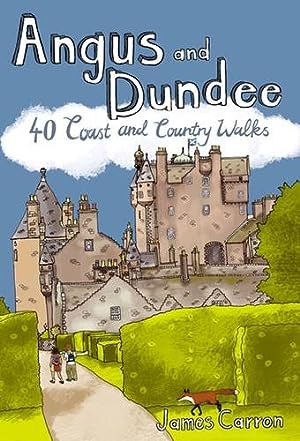 My girlfriend and I have set ourselves a little challenge, to complete all the walks in the book Angus and Dundee: 40 Coast and Country Walks

Our next trip was to the Caterthuns, a pair of iron age forts near Edzell. Access by road is fairly easy, as you can park exactly between the two hills. Upon arrival, I immediately felt slightly disappointed as they did not look particularly challenging. The hills rise only approximately 55 metres above the road. The pair could easily be conquered in about 40 minutes, including lengthy breaks to explore around the tops and take in the views.

The views were fair, but not exactly spectacular. The cloudy weather probably didn’t help. But it was difficult to see anything of great note.

As the road starts between the two forts, you can choose to do one or the other first. We opted to start with White Caterthun, named because of the light colour of the stones. As you enter a gate, an information board educates you on what exactly the Caterthuns are. Although the forts are well preserved, not much appears to be known about them. Archaeological investigations have apparently yielded little. However, one notable feature of White Caterthun is the large hole in the ground, thought to have been used as a well or cistern.

It takes only around five minutes to scale White Caterthun. Nevertheless, it is the more spectacular of the two. It is more well defined, and has the better views.

No doubt the fact that such ancient forts are so well preserved is rather impressive. But anything you can say about their function appears to be little more than speculation. So little is known about them that I found it difficult to relate to them.