The perils of the ‘launch and leave’ approach to project management

Our perspective on how a digital product should be managed is strongly influenced by our background and our role.

Neil Allison, UX manager at the University of Edinburgh, recently published some interesting findings on attitudes towards design principles among his colleagues. His survey asked colleagues across the university to prioritise some common digital design principles from other organisations such as the Government Digital Service.

The results are generally cheering, with most of the top selections focusing on the importance of user needs.

However, I was struck by the short section on differences in attitudes between roles.

Service and product owners place a high emphasis on continuous improvement. But project managers and business analysts are apparently much less interested in the concept of there being no such thing as ‘done’, and of supporting a product once it has launched.

That certainly helps explain some of the difficult conversations I have had with project managers and business analysts over the years.

The attitude that going live is the end is known as launch and leave. With this approach, teams focus on a big bang launch, and immediately forget about it, moving on to the next big vanity project.

I find launch and leave particularly frustrating because you only really learn how a product is being used once it’s out there in the wild. You can do all the focus groups, surveys and up-front usability testing you want. But people often say one thing and do another.

You get so much more information about how people are actually using your product after it has launched. You should use those insights to improve the product post-launch.

There is no “done”: Perfection is a mythical state. Indeed, “Perfect is the enemy of the good”. Enhancement of services and user experiences is an ongoing process, and development needs to be continuous.

The virtues of continuous improvement 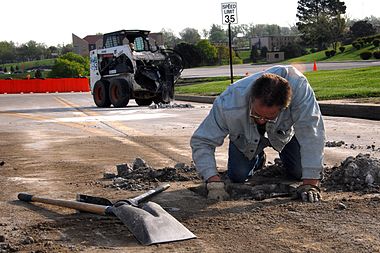 It is easy to understand why some managers are attracted to launch and leave. For one, we all like to feel as if we are getting through our big to-do lists. Moreover, new things are exciting and sexy. Improving existing things — for whatever reason — is seen as a dull job. Yet it is this continuous maintenance that keeps the world turning.

Do we focus too much on innovation at the expense of improving what we have? This was the subject of a recent Freakonomics podcast: In praise of maintenance. In that, Lee Vinsel from the Stevens Institute of Technology said:

Focusing on taking care of the world rather than just creating the new nifty thing that’s going to solve all of our problems. If you look at what engineers do, out in the world, like 70 to 80 percent of them spend most of their time just keeping things going.

The problem with project management comes when a project is defined as a piece of work with an end point. I find that a damaging approach.

Of course the research and development work you do pre-launch is vital. But iterative development and continuous post-launch maintenance must also be part of the plan.

I have worked on projects where we put in a lot of effort assuring stakeholders of our willingness and ability not just to launch the product but to continuously support it. When those products launched, we were inevitably plucked away and asked to go and work on the next shiny new thing.

This is another area where we can learn from the mistakes of the past in architecture.

To alleviate housing shortages in the aftermath of the second world war, governments and local authorities rushed to construct brutalist high-rise buildings to house the poor.

Initially a lot of this housing was seen as luxurious, certainly in comparison to the slums they were replacing. But soon many of the buildings became a byword for bad quality and miserable living conditions.

In Edward Hollis’s excellent architecture history book The Secret Lives of Buildings (2010, pages 257 to 258), one chapter tells the story of the Hulme Crescents. This was a vast highrise estate designed to alleviate Manchester’s housing shortage.

Here is the account of former Hulme resident ‘Caroline’, which Hollis found on the web:

Then suddenly about 1972 I think it was things started to go wrong. And like I say people started to move out… it all went so wrong, don’t know how but it did. As the crescents started to get bad, the badness started to come.

The Hulme Crescents had design flaws, to be sure. But Hollis’s book tells a story of council mismanagement and an unwillingness to properly maintain what they had put so much effort into building.

Reading histories of this and similar buildings, it is striking just how often they were seen as engineering marvels at launch, only to quickly decline in standing (literally, in the case of Ronan Point).

Neglect would set in. First, the building would begin to deteriorate. It was then that the social problems would arrive.

Another example is Glasgow’s Queen Elizabeth Square, designed by Basil Spence. One resident, Eddie McGonnell, was interviewed by John Grindrod for his book Concretopia (2013, pages 157 to 158). He described moving to those flats in effusive terms:

It was like going into Buckingham Palace, bearing in mind where you’d come from. For us to go into those flats was a total transformation.

But a few chapters later he describes how conditions deteriorated (page 340):

They became dilapidated, which happens when you’re not getting investment from the city council. If they’d had investment the people that were in them would have maybe have taken more pride in them as well…

I think Spence was a visionary, but he was too far ahead of the culture. He was the scapegoat, the whipping boy. It was the council that was to blame.

Some high-profile projects had serious design flaws. But the biggest problem with the buildings was the fact that local authorities by and large failed to maintain them properly.

How different things might have been if councils prioritised maintenance as much as putting up the new buildings in the first place.