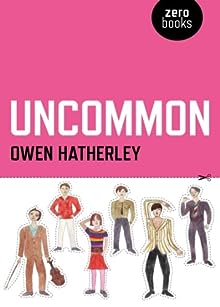 I was delighted to receive Uncommon by Owen Hatherley

from a friend at Christmas. I am a huge Pulp fan, but this book had slipped under my radar.

Pulp were culturally significant in the 1990s, but their story is far more fascinating than even that suggests. Pulp first formed in 1978, and had a lot of ups and a lot more downs on their way to superstardom. So they are a great subject for a book.

But there are already biographical accounts of the Pulp story. I would highly recommend Truth & Beauty by Mark Sturdy

if you want to learn about Pulp’s career.

For this reason, Owen Hatherley wisely avoids retracing those steps. Instead, Uncommon is a chronological journey through Pulp’s most significant songs.

The problem is that music is very personal. Your reaction to music depends on a whole variety of factors. We tie music up with events in our own lives. This makes music deeply personal and difficult to analyse subjectively.

As such, debates about music can be vicious. Because it is so personal, people can find themselves being offended by someone else’s opinion on it.

Reading an entire book of someone else’s opinion on music is like slapping yourself with a wet fish. I would devour any book about Pulp, and I certainly found Uncommon to be a page-turner. But I also found something to annoy me on almost every page.

Owen Hatherley comes across as a bit of a grump, with not much positive to say about anything. Even Pulp themselves don’t get a very good press. The only Pulp song that the author seems to wholeheartedly enthuse about is Sheffield: Sex City. Even then, the book hints that this was really because of what was going on in his personal life at the time.

Worse still, much of the book is devoted to bizarre criticisms of other bands, and other cultural and political events. Often these have quite tenuous links to Pulp.

Barely a page goes by without an attack on Blur. I found that odd because the paths of the two bands did not really cross (apart from the Britpop link), yet the author keeps on returning to Blur. Besides, with the exception of Pulp, Blur were easily the most musically interesting band of the era. So I find them quite an odd target. But then again, music is such a personal thing.

In the middle of the book, and from almost nowhere, the TV programme Shooting Stars is criticised twice in quick succession — never to be mentioned again. These unrestrained attacks make the book seem like a stream of consciousness at times.

On the plus side, some of the analysis is insightful and original. He comes into his own when relating Pulp’s music to architecture. This book goes far beyond the usual “oh, Jarvis is a bit of a perve” school of analysis. For a songwriter whose lyrics are so good, an appreciation like this is long overdue. You can tell that Owen Hatherley has thought deeply about Pulp’s lyrics.

However, even in this regard the book ultimately disappoints for its inconsistency. You can really sense that the author still hasn’t forgiven Pulp for the change in direction they took with This is Hardcore. He criticises the album for being about fame, and “the tricks on the brain caused by national acclaim”. Then in the very next section of the book he goes on to praise B-sides The Professional and Cocaine Socialism, neither of which could possibly have been written before Jarvis Cocker was famous.

Nor does the book ever truly fulfil the promise made in the introduction, of explaining why Pulp rose to superstardom in the mid-1990s, having spent over a decade in obscurity, before disappearing a few years later and leaving “no legacy”. The closest thing to an answer given by this book is that releasing This is Hardcore as a single was commercial suicide — hardly a revolutionary insight.

There are interesting questions to be asked about Pulp’s career trajectory. Explaining it away as a change in culture combined with their decision to release more difficult music isn’t terribly satisfying. After all, at the same time as This is Hardcore was released, Radiohead were cementing their reputation by releasing more difficult music. Radiohead remained commercially successful. Surely, as regards Pulp, the answer is more complex than that they took a left turn and alienated fans.

A potentially good book let down by poor editing Another disappointing aspect of the book is that it is full of distracting typographical errors and inconsistencies. In many cases, lyrics are even incorrectly transcribed. The errors are rarely enough to change the meanings of the lyrics (although the author certainly seems to have misinterpreted one line from Mile End). But it was enough to irritate me as a Pulp geek.

Some of the writing is also horrendously convoluted, to the point of being almost unreadable at points. It wouldn’t harm anyone to keep the sentences short.

Sometimes it feels as though no-one had read the book before it was printed. (The acknowledgements at the back reveal otherwise.)

Uncommon would have hugely benefited from having a good editor. Someone who could say, “you’ve gone too far with that idea; there’s a typo there; you could add a full stop here.” That way, Uncommon might have been a great book. As it stands, it feels more like a rushed stream of consciousness, albeit one with real insight.

For a more fulfilling analysis of Pulp’s music, I would highly recommend the blog Freaks, Mis-Shapes, Weeds, which is in the process of analysing every Pulp song in known existence.