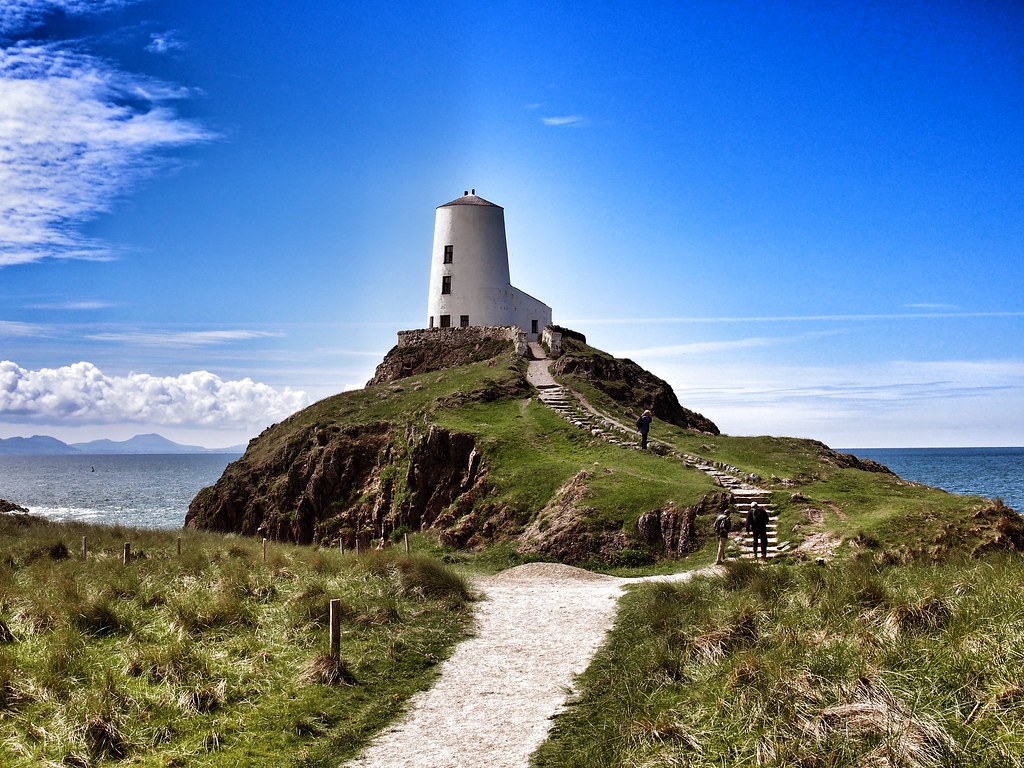 Last month my girlfriend and I went on holiday to north Wales. It was my first visit to Wales. The geography reminded me a lot of the Lake District and the west of Scotland to an extent. Just the sort of place I like. 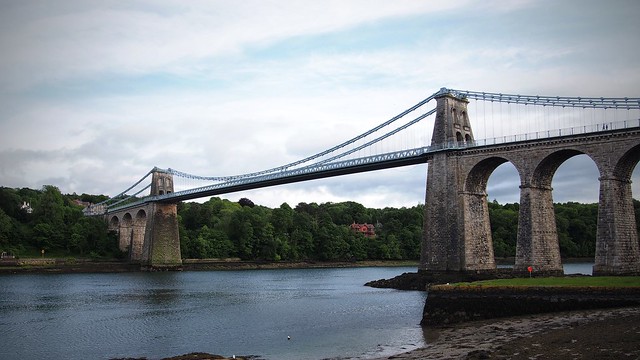 For a couple of nights we stayed in Menai Bridge. It may be a cliche to say, but being on Anglesey does sometimes feel a bit like you are in a totally different part of the world.

Driving around the island, parts of it reminded me a lot of the East Neuk of Fife. 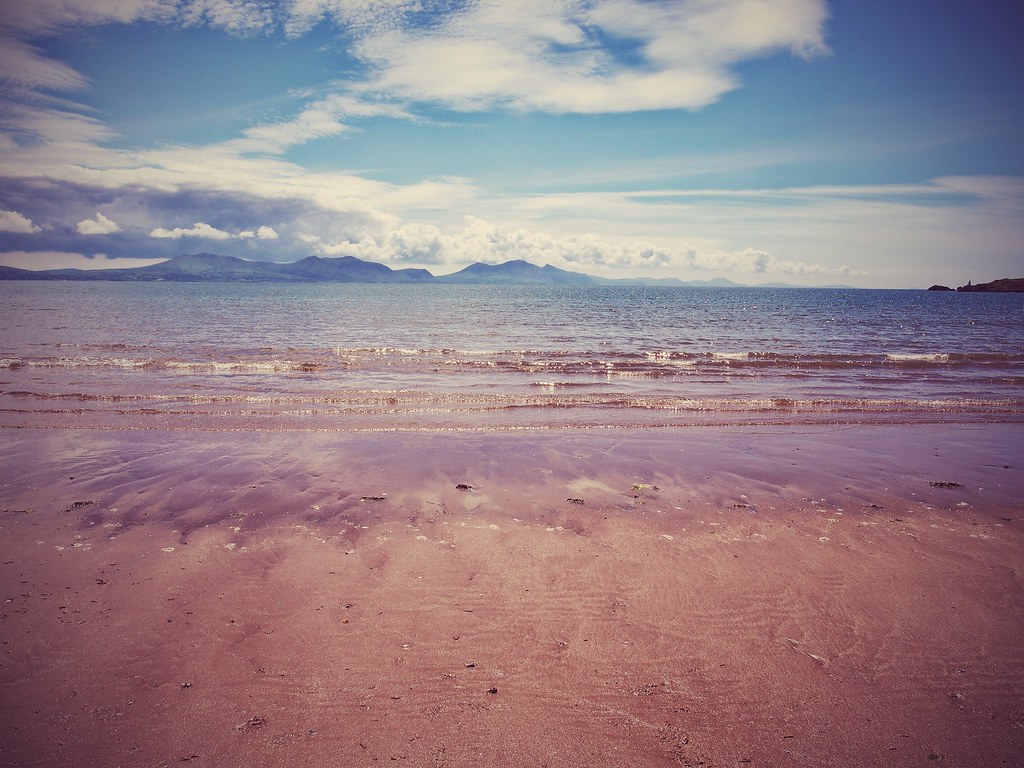 Nowhere was more spectacular than Newborough beach. We were lucky that the weather was so good. It genuinely felt like being abroad. 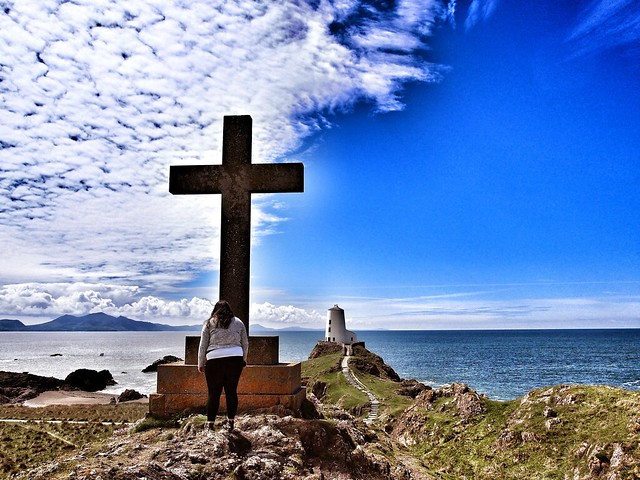 We walked to Llanddwyn Island, with its striking landscape containing a number of incredible landmarks. The area is named after St Dwynwen, the Welsh patron saint of lovers. The features here include the remains of St Dwynwen’s Church, a couple of crosses and two lighthouses. 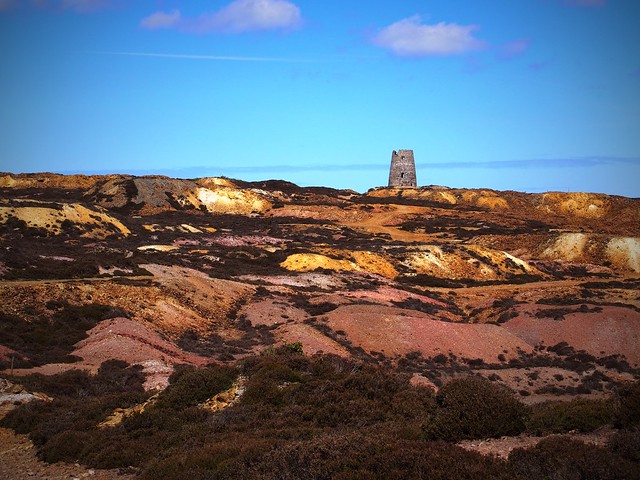 But as otherworldly and picturesque as that was, it was topped by the incredible Parys Mountain. This is the site of an extensively exploited bronze age copper mine. 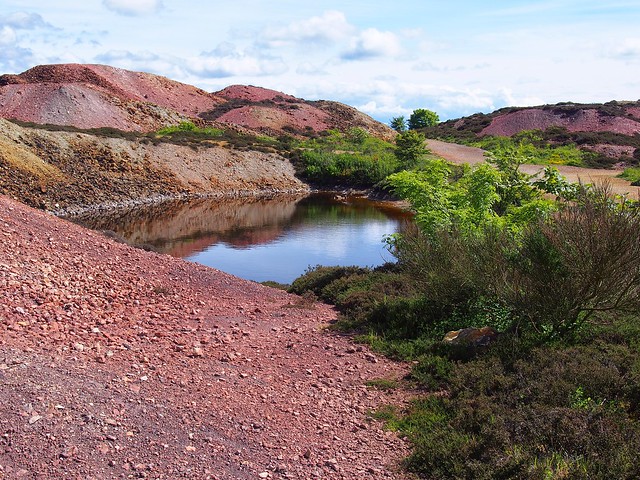 We had no plans to stop off there. Indeed, we had never heard of it. But as we drove past it I just had to pull over and investigate. The colours here are incredible and I wish we could have explored a bit more. 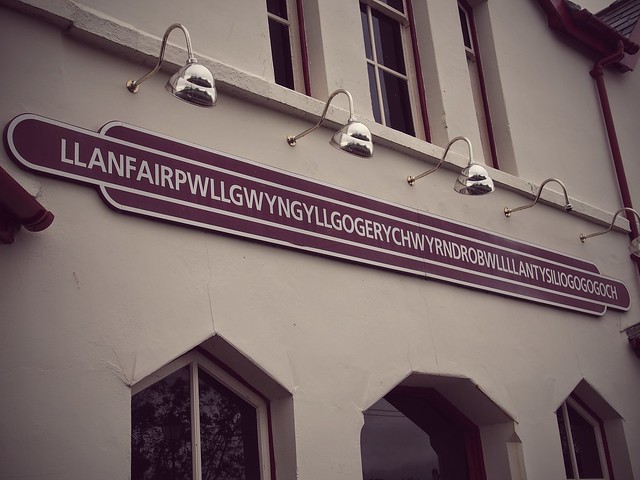 When I spotted a road sign to Llanfair PG, I instinctively yelped that we had to visit. At the time, I had no idea that we were literally just a few minutes down the road — so we went there straight away.

I guess there is not much to see there apart from a few train station signs. But that was definitely a bucket list item ticked off. 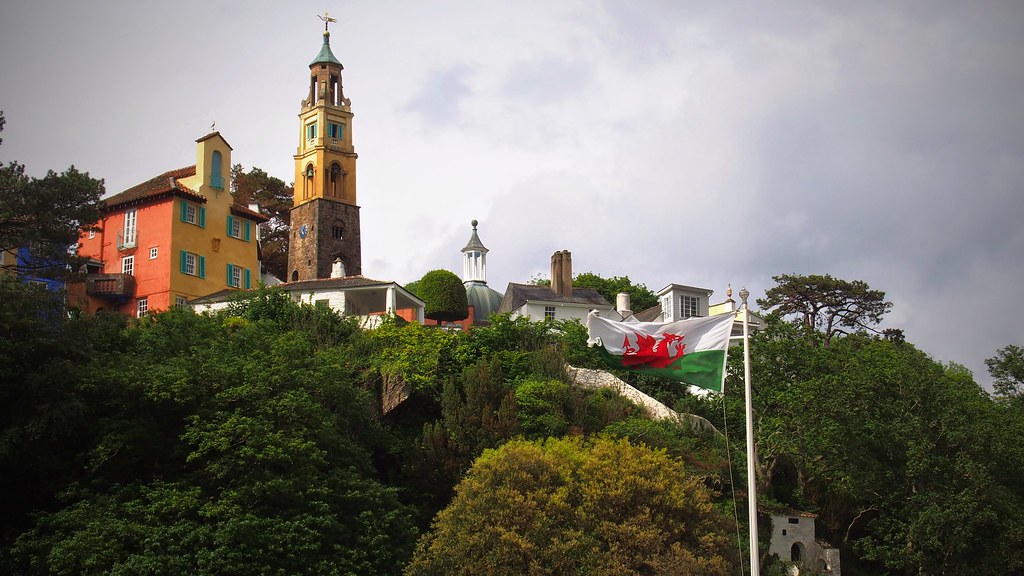 Later on we explored more of north Wales. We were told we should visit Portmeirion. It is possibly one of the most inexplicable places I have ever visited.

I am not sure I liked it. The place is rather tacky and I just wandered around the place thinking, “why?” Many of the people there seemed to be there to try and snatch back some half-memories of The Prisoner.

But Portmeirion certainly provides a talking point. And the surrounding scenery is stunning. 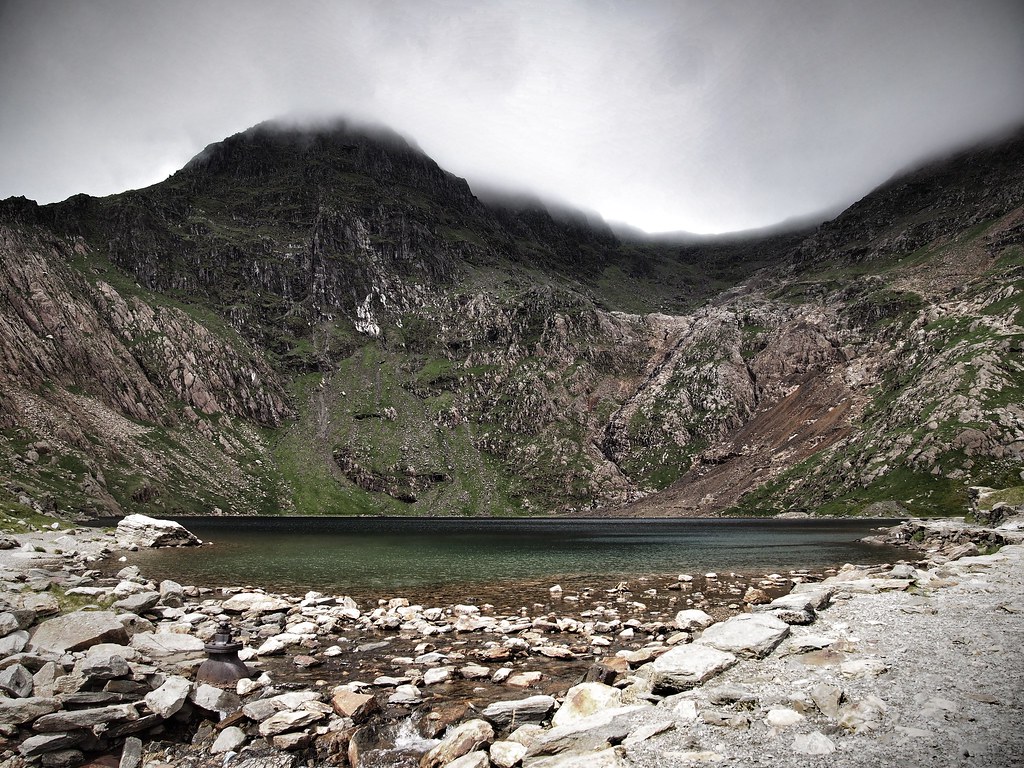 My personal highlight of the holiday was climbing Snowdon. It was a bit tougher than we had been expecting. We were planning on parking at Pen-y-Pass. But despite arriving at what we thought was an early time the car park was full, meaning we had to drive on to find a space further down the hill. That probably added an extra hour to our walk.

We took the picturesque Miner’s track. This winds its way around a few lakes, and is relatively flat for the first half of the distance. But then it goes very suddenly steep, and you face having to climb up what feels like the whole mountain in one go. 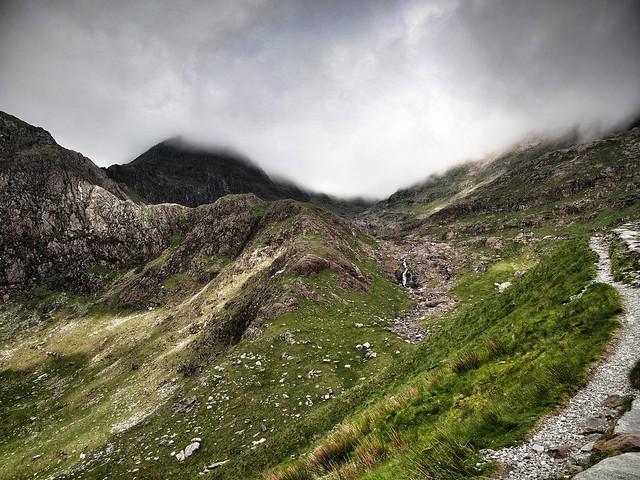 The top of Snowdon was very foggy to start off with. But we were anticipating that. The weather forecast said the morning would be foggy, but that it would clear up later. 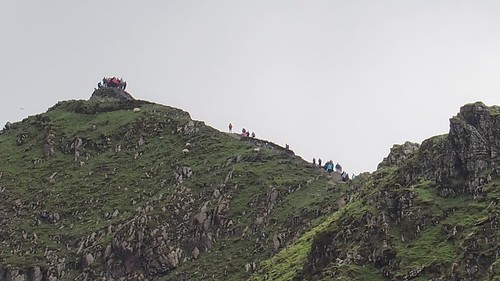 We got closer and closer to the top, and the top was still covered. But our heads never reached the clouds. As we came to within touching distance of the top, spectacular sunshine awaited. The summit mound with people surrounding it looked like a crown on top of this majestic mountain.

Once we reached the top, it was all action. It felt rather quiet on the way up — we had barely seen anyone. But with all the pathways converging at the top, there were as many people as a bustling town. 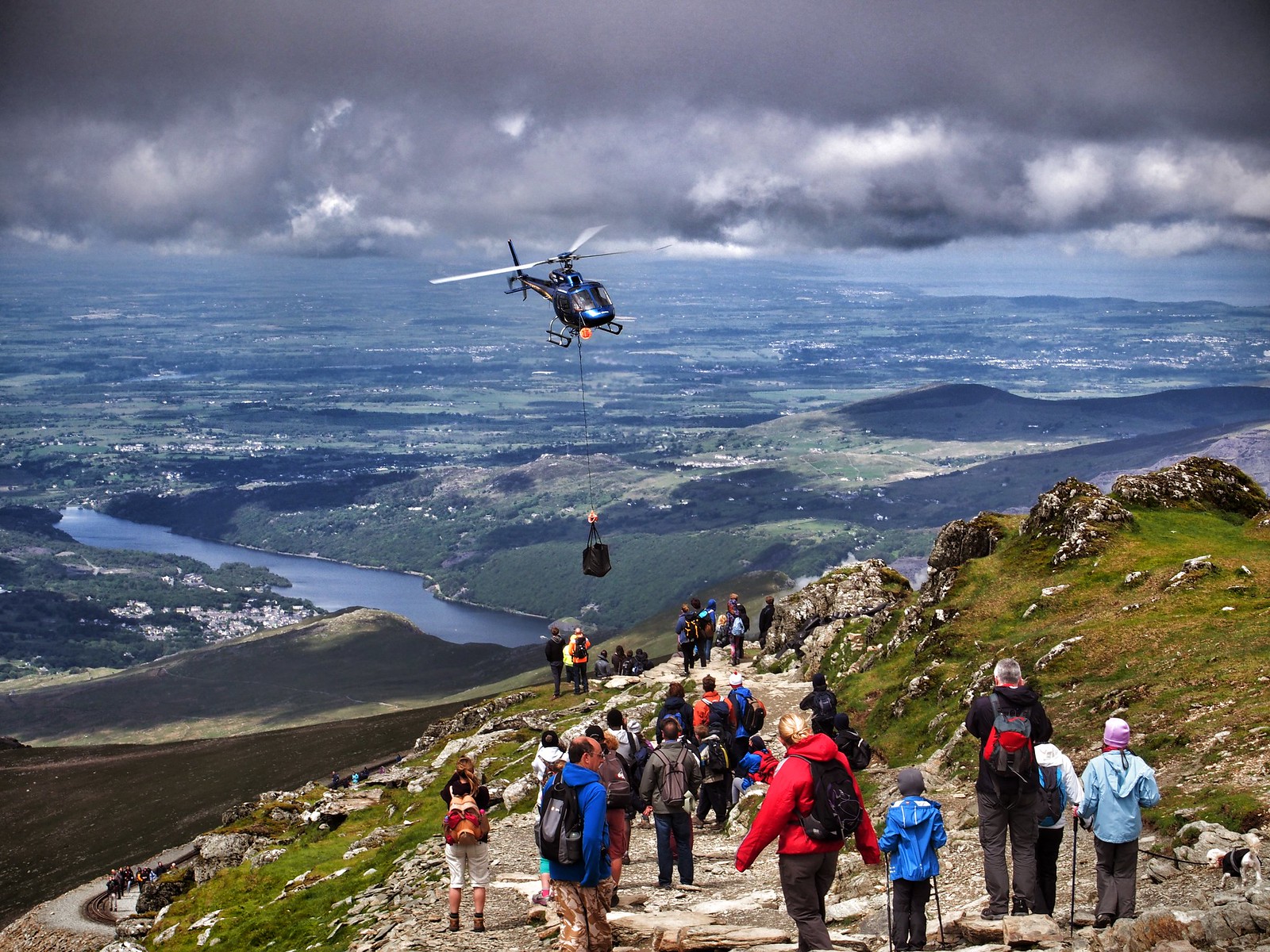 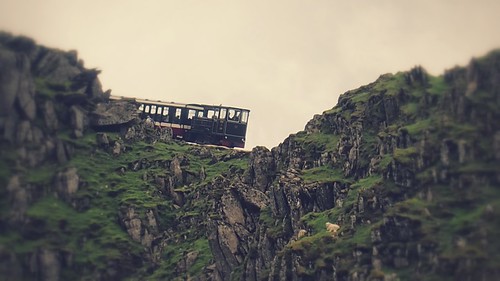 Then there was the additional excitement of the trains and a helicopter dropping off huge boulders.

As we reached the top, we were exhausted. My girlfriend watched the helicopter come in for the first time to drop off some workers. She turned round and said, “that’s cheating!” 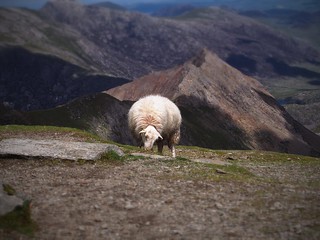 The earliest recorded ascent of Snowdon was in 1639. But it is impossible to believe that it hadn’t been conquered before that. There were so many people at the top, so many ways to get there and excellent facilities including a Riba award-winning visitor centre. Sheep thought nothing of being at the summit. 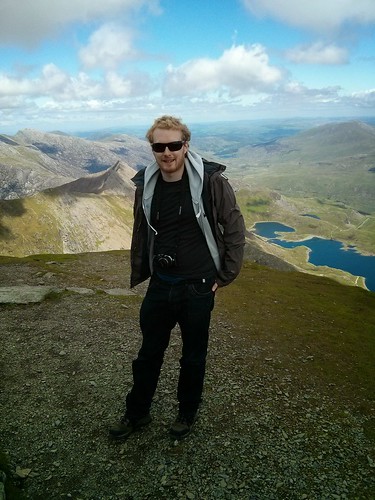 It had taken us around four hours to reach the top. We paced ourselves well on the way up, so I felt relatively good considering I had climbed twice as high as I had ever done before. 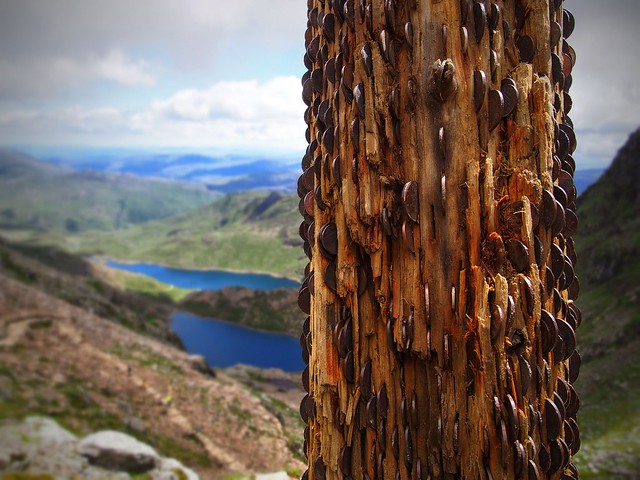 We took an hour or so at the top. The journey down, which we took via the Pyg track, was much more painful than the climb up. It probably took longer than the four hours on the way up. By the end of it all we were exhausted. But what a sense of achievement we had. 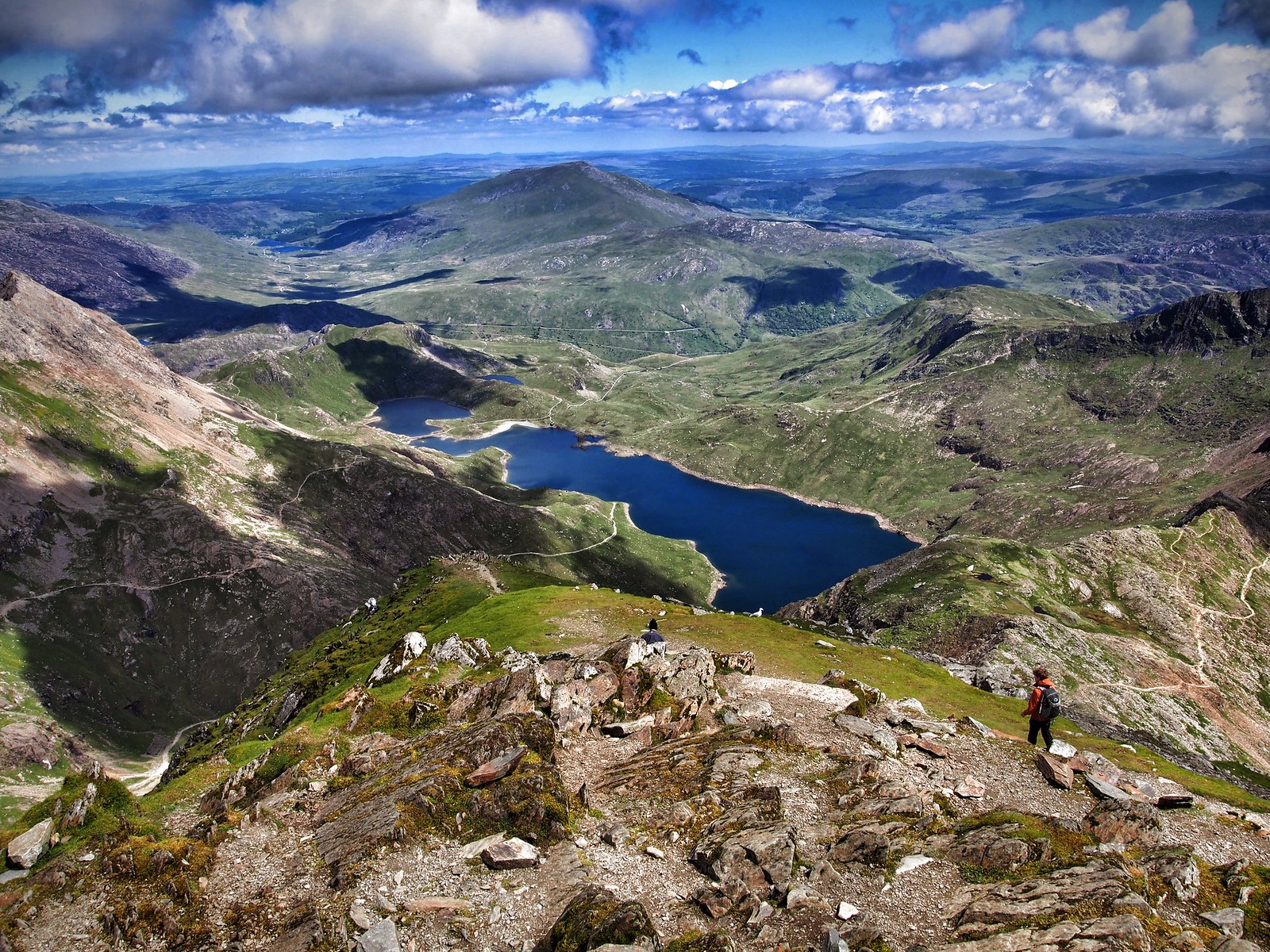 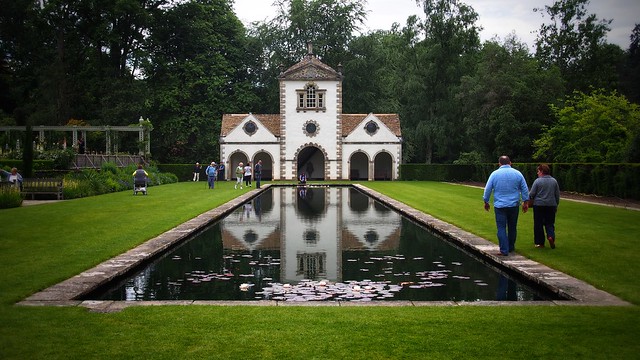 After that tough day climbing Snowdon, the following day saw a more relaxed approach as our trip to Wales came towards its end. We visited Bodnant Garden, and felt like we’d aged a few decades. Lovely place though.

The perfect place to relax after a gruelling day climbing Snowdon was these Shepherds’ Huts near Betws-y-Coed.

Here there is no electricity and no mobile signal. This truly is the place to go if you want to get away from it all.

Facilities are basic, yet somehow luxurious. One hut is a living area containing a sofabed, a table and a wood burning stove. A camping-style kitchen area is outside. The second hut contains bathroom facilities, including a good camping-style toilet, a shower and… a sauna. That last item may be a bit of a novelty, but it is one we took pleasure in utilising!

We were made to feel very welcome by our host who bent over backwards to make sure we were comfortable. I would recommend a stay here, as well as a visit to north Wales in general.