Why I won’t be voting for the SNP

This is the first of four articles I will be publishing about the major parties standing in my area. You may be interested in my introductory article: Initial thoughts from Dundee West on the general election.

From a Scottish perspective, the story of the election is undoubtedly the rise of the SNP. This is a historic time for Scottish politics, and there is a chance that the SNP could win all the seats they contest.

I am pleased for their supporters that so many people are enthused about this election. There were a lot of bad vibes about last year’s independence referendum. But it is striking that so many people have found a reason to get excited and involved in politics.

However, I am fascinated at just how little of the SNP’s support is based on the realities of their record, or even an awareness of their policies.

A lack of logic; an emphasis on spin

The SNP have long been the most expert of parties at communication. This devastating analysis shows what the SNP has done to Scotland as it has sought to manipulate the population.

I still think the SNP’s 2007 Scottish parliament election slogan “It’s time” was evil genius; the ultimate dog whistle. They never said what it was time for, allowing them to tap into a general feeling that something needed to change — without ever actually explaining what they would change. Through this campaign, they scooped up votes left, right and centre — literally.

It will come as no surprise to anyone who has attempted to engage in debate with nationalists that research has shown that SNP supporters are not even paying attention to arguments about policy. No amount of rational argument will sway these people.

This approach is becoming apparent among some no voters as well. Sadly, the binary and divisive nature of the independence referendum has meant that Scottish politics has largely become totally faith-based. It has become a flag-waving exercise. For those of us who genuinely care about policy, this is a disturbing development.

Disconnect between rhetoric and reality

That the SNP are the masters of talking left and acting right is by now a banal observation.

This year, the SNP’s big buzzword has been austerity. They would have you believe that they would reverse government spending cuts. However, the Institute for Fiscal Studies has shown that the SNP actually plan to cut harder, longer and deeper than Labour or even the Liberal Democrats.

This led the IFS to directly comment on the disconnect between the SNP’s rhetoric and their actual plans.

Highly significant that the IFS are so direct about how misleading SNP's rhetoric has been http://t.co/OjdRSQ7Acm pic.twitter.com/vtCYx0tVWp

As noted by Chris Cook, the SNP reject this analysis — but only by refusing to use conventional accounting methods. That may be a polite way of saying that they’re cooking the books.

But that’s all for the future. What about the SNP’s record in government?

The SNP have made the abolition of university tuition fees one of their keystones. This policy is hugely popular among influential middle class parents and the middle class owners and editors of newspapers. However, there is little discussion of the true effects of the policy.

Meanwhile, grants available to Scottish students have become among the lowest in the whole of Europe. This hits the poor the most.

I have long felt that free university tuition fees are little more than a straightforward subsidy for the middle class. University education is a broadly middle class pursuit, and it continues to be so.

Advocates of free university tuition would have you think that it would make it easier for poorer students to get into university. However, the opposite is the case.

Poorer people have the most to gain from attending university. Middle class people need it less. They have more social capital, and are less likely to need a degree to get a good job. They may find good employment anyway through family connections, higher levels of confidence, and so on. If they have to pay for university, these people would be less inclined to go.

As such, making university education free or cheap has the undesirable effect of stuffing it full of middle class people, some of whom might not necessarily apply themselves. This squeezes out more diligent poorer students who would see education as a vital investment for their futures.

Think this logic is flawed? Then I am willing to hear alternative explanations as to why the number of people from deprived backgrounds applying to university is now highest England. According to the Higher Education Statistics Authority, just 26.8% of Scottish students have parents from less skilled occupations. In England that figure is 33.1%.

Scotland is now the only part of the UK where borrowing is highest among students from poorer backgrounds. And poorer students in Scotland graduating with £16,000 of debt must pay back more than an equivalent English person with £36,000 of debt.

Awkward: If in bottom 20% of earners, a Scots graduate with debt of £16K will pay back more than comparable English grad with debt of £36K.

Recent research was clear in its findings, as reported by the Financial Times and the BBC:

For young students in full-time higher education in Scotland, the net effect of policy decisions over the decade to 2015-16 will be a resource transfer from low-income to high income households.

This is a national scandal.

The standard stock line for nationalists is to blame “Westminster” or “austerity” for such problems. But education is a devolved issue in Scotland, and has been the full responsibility of the SNP Scottish government since 2007.

Historical government expenditure data provides a clue as to what might be going on. This chart, by the estimable Kevin Hague, shows how much the Scottish government spends per person in each policy area relative to the UK. This enables us to compare the priorities of the two governments. 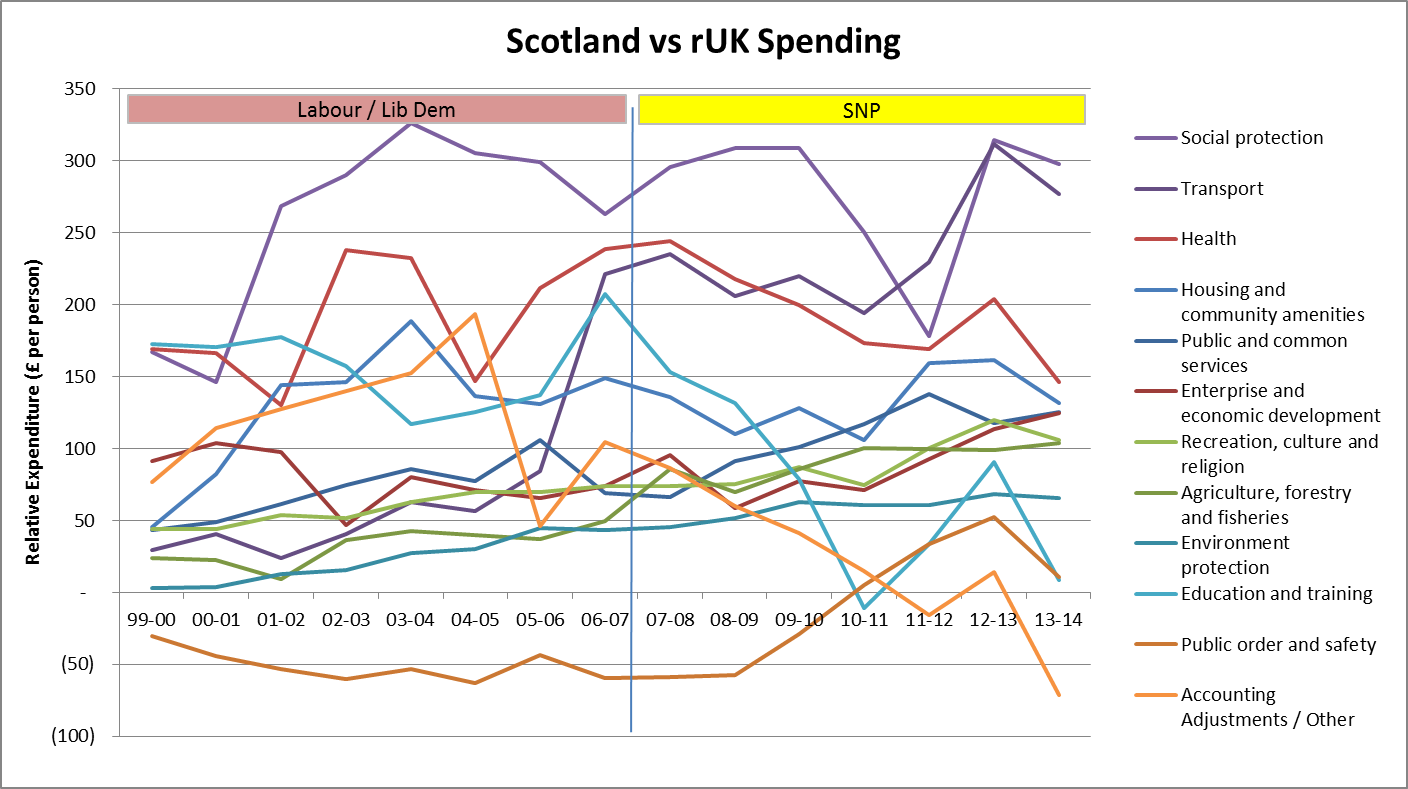 There is a lot going on in this graph, so Kevin Hague helpfully highlighted two areas of note: 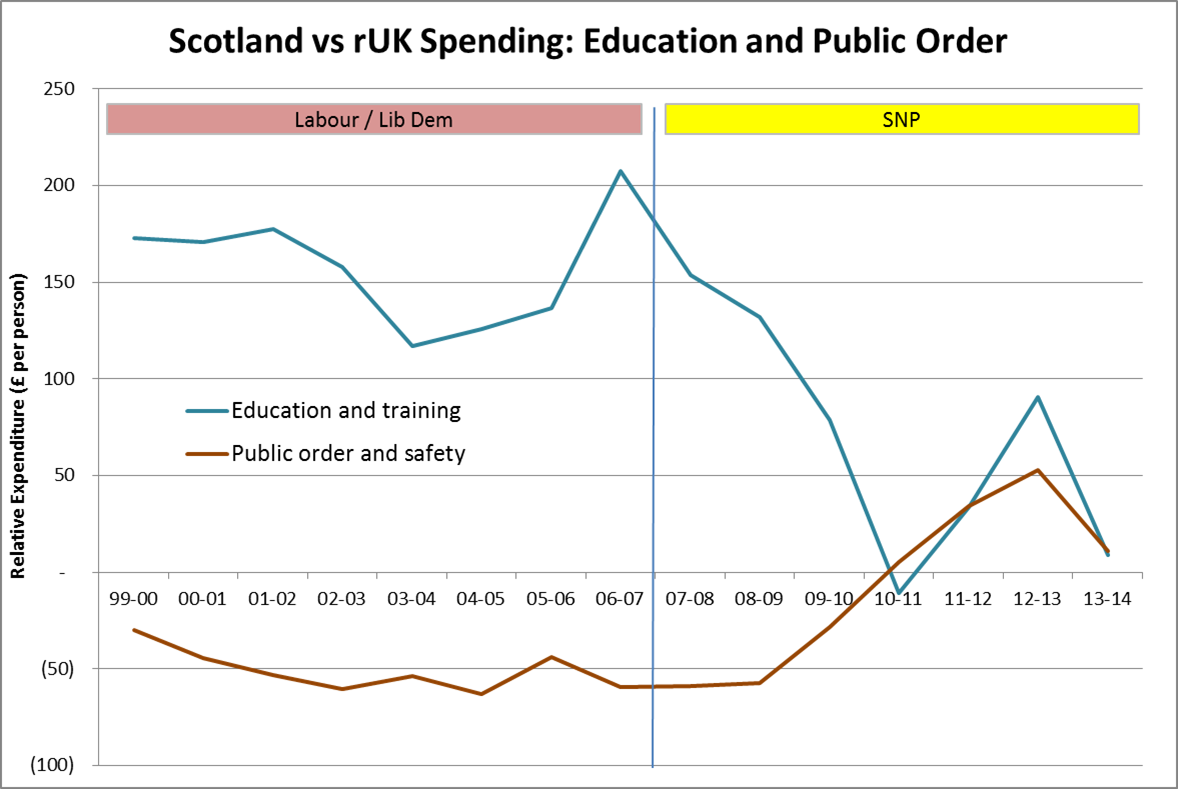 Here you can clearly see how spending in education has been dramatically decreased in Scotland under the control of the SNP. Under the previous Labour / Liberal Democrat Scottish government education was always a higher priority. Under the SNP that is no longer the case.

Meanwhile, spending in public order and safety has increased. This points to another disturbing trait of the SNP — its inherent authoritarianism. If anything exposes the meaninglessness of the SNP’s proclamations to be “progressive”, it is this.

Under the SNP, Scotland’s policing has been centralised. This has left control in the hands of the few, and has eroded local accountability.

The police force has also become more authoritarian under the SNP’s watch:

The Offensive Behaviour at Football and Threatening Communications (Scotland) Act is an attack on free speech, and a dangerously vague one at that. While sectarianism needs to be tackled, ill thought out legislation is not the way to go about it.

It has become illegal to sing certain songs, wave flags or even bless oneself inside a football stadium. An SNP MSP even said that people wearing yes badges in a football stadium may face action. As a result of this legislation, there have been dawn raids on football fans.

Just years after Labour’s plan to introduce ID cards was defeated, the SNP government is attempting to create a national identity register through the back door. They want to abuse an NHS database to bring in this tool of state control. They would have your NHS data shared among over 100 government agencies, and seek to track your behaviour right down to your use of the Cairngorms National Park Authority.

Most chillingly of all, the SNP government plans to appoint a supervisor to monitor the upbringing of every child under the age of 18. Under the SNP’s plans, the state will be breathing down your neck even for that most fundamental of human activities — bringing up your own children.

Freedom is a word strongly associated with the independence movement. But the reality of nationalism is that there is nothing free about it. Under this evil ideology, the nation state is all-powerful above the individual. The people would have precious little independence.

The next time someone dares to describe the SNP as progressive, tell them to progress on.