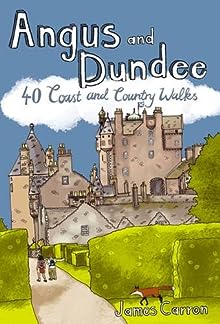 As part of our project to complete 40 walks in Dundee and Angus, our next selection from the Pocket Mountains walking guide

was the Newtyle Railway.

Newtyle is a village 11 miles northwest of Dundee. Despite being a small town with not much going on, Newtyle holds an important place in Scotland’s railway history. It was the terminus of the Dundee and Newtyle Railway, opened in 1831.

This was the first commercial railway in northern Scotland. In one form or another, it remained in operation until the Beeching cuts of the 1960s.

I have been fascinated by the Dundee and Newtyle Railway since I discovered that it ran very close to where I live in Dundee. The railway ran through a tunnel that was dug through Dundee Law, the 174 metre tall hill that sits in the middle of the city.

Some decades later, someone realised it would be more sensible to run the railway around the hill rather than through it. As such, traces of the railway can be found in many different parts of Dundee. For one example, part of the railway is now a wildlife reserve called the Miley, which is pleasant to walk along.

But while I have explored various parts of the Dundee end of the railway, I had never been to Newtyle. So when I saw a walk on the old Newtyle Railway in the book, I was eager to investigate it. However, the walk does not cover the original railway. Instead it heads north onto later routes that reached further destinations such as Coupar Angus. In fact, there are plenty of disused railway lines in this area. It’s very possible to trace the paths of them from satellite images. Many of the disused railways form a part of the Newtyle Path Network, which is well signposted. The walk is very pleasant. It begins alongside a small park area and heads out into fields before entering a wooded area.

The path curves very gently left. So gently, in fact, that we both found it slightly disorientating, still believing we were heading north even when we were walking south.

After a while, the route leaves the railway and takes you along the road to the tiny settlement of Newbigging (not to be confused with the village of the same name two miles to the east of Dundee). From here, you join Water Backie, a burn that runs along farmland. It is very straight and presumably man-made, but is lovely nonetheless.

After a short while, you rejoin the railway path network, walking along more disused railway embankments.

All too quickly, we found ourselves heading back towards Newtyle itself, and the end of our journey. All in all, despite the book describing it as a two hour walk, it took us just 80 minutes to complete the walk. That was even going at a gentle pace, and stopping frequently to admire views, take photographs and so on.

However, despite the short distance, the walk is unexpectedly varied and surprising.

There seem to be quite a few walking paths in and around Newtyle, and we will definitely be making a return trip to explore the area further.