The most significant advances the human race has made in recent times have revolved around mobility. We have an innate desire to pursue this freedom.

That is what made the past 100 years the century of the car. The invention of motor vehicles changed the way people structured their whole lives. In the past couple of decades, that societal transformation has ramped up as improvements in technology allowed us to make our communications mobile as well.

A lot of the most exciting trends to come in the next few decades will also revolve around mobility. For instance, driverless cars will free us up to remain productive while being mobile, rather than having to concentrate on driving.

Similarly, the current hype surrounding conversational user interfaces and virtual assistants promises to make us more productive on the move.

The rise of audio interfaces

For a while I have thought that a lot more of our digital interactions will take place over audio interfaces. Sure, for a long time speech recognition has been a joke. But so were touch screens once upon a time. Then one day, all of a sudden, they were awesome.

I see audio interfaces as the logical next step in our quest to become more productive while being mobile.

If you think about it, screens are actually a terrible idea for a mobile interface. When you’re on the move, looking at a screen is the last thing you want to do. Unless you’re careful, you’ll run into a lamp post or step in a dog turd.

If you get an urgent message when you’re in a rush, it would be far more convenient to receive it audibly through your headphones. You wouldn’t have to rummage around for your phone, and it would save you a lot of time.

Smartwatches are an early attempt at solving this problem. But they still suffer from the same core issue: they still remove your ability to see the path ahead by forcing you to look down at a screen. 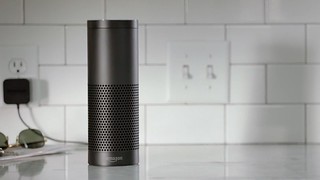 There is currently a lot of attention on Amazon Echo, a speaker-like device that sits in your home awaiting your instructions. It can play music, tell you the news, and it can wake you up in the morning. Google’s newly-announced Home product takes square aim at that.

These products both tap into the serious hype that surrounds conversational user interfaces at the moment. But I don’t understand the hype that surrounds the Amazon Echo in particular. All Amazon seem to have done is scrunched Siri up, put it into a black cylinder that looks like a poncey bin and chained it to the corner of a room.

If I want to, I can have a conversation with Google Assistant in my phone and take it wherever I want. And if it wants to alert me to some important information, Amazon Echo would be no use if I wasn’t in the room with it. Instead, surely mobility is where the future of conversational assistants lies.

Amazon and Google must sense that there is demand for these products. It seems that we are getting to the stage where we would rather have a conversation with our devices than use a screen to get things done. That would have huge implications for how we design digital products.