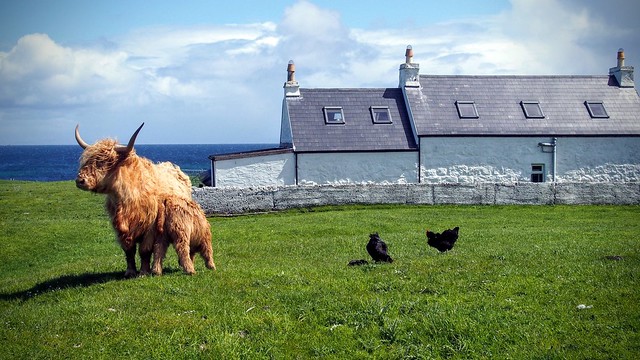 Alex and I took a trip to Tiree in May. It was my first visit to a Hebridean island – a long overdue tick on my bucket list.

It is an extraordinary place largely defined by its remote location, facing towards the Atlantic ocean. The island has an unusual geography. It is flat as a pancake, with only two hills to speak of. But what it lacks in height it makes up for in other forms of drama and beauty. 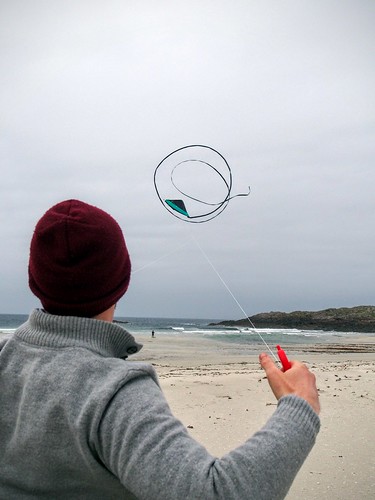 The beaches, for instance, are absolutely stunning. And not just for the visual appeal. Tiree’s amazing location makes it ideal for surfing.

I’m not the type for watersports, so I got my adventurous kicks in other ways — but more on that later.

There are many secrets on the island. Amazing places are discovered by chance. Much only happens if something just happens to come up in conversation with a local.

Everyone who is local knows seems to know everything about everyone on the island. We could tell people what town we were staying in — Kilmoluaig — and they would already know exactly which cottage we would be in and whose it was.

This inside-out intimacy must cause residents to lose perspective on what will be of interest to others. Or perhaps they want to keep the secrets to themselves. Even specifically asking for interesting things to do sometimes didn’t garner much of a response from many locals.

So here is what they keep quiet about Tiree. 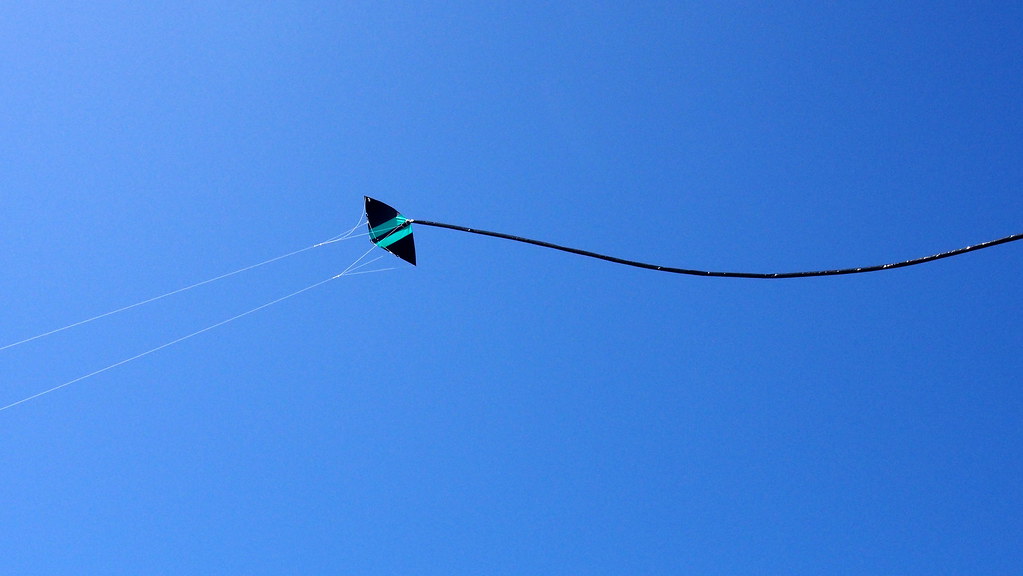 The island’s numerous, expansive and breezy beaches make it a perfect place to go kite flying. Many a glorious hour were spent untangling this beast and unleashing it into the Tiree sky, along with Alex’s friends Lucy and Cameron who joined us for the first couple of days. 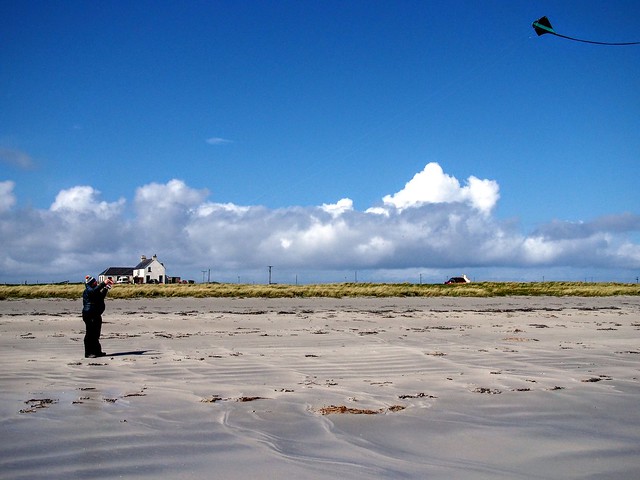 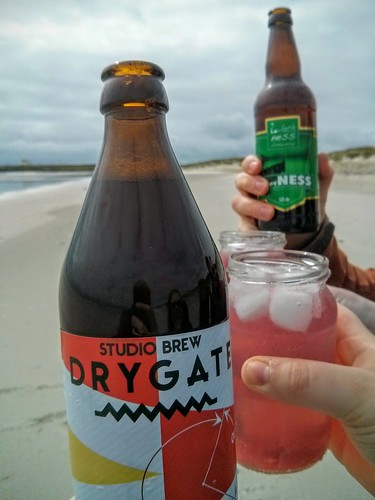 Tiree is a great place to have a beer on the beach. Responsibly, of course! Just don’t tell the island’s only cop. Incidentally, he was very helpful to us when we had to report the loss of Lucy’s GoPro, which had been stolen by the sea. 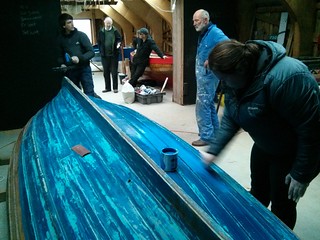 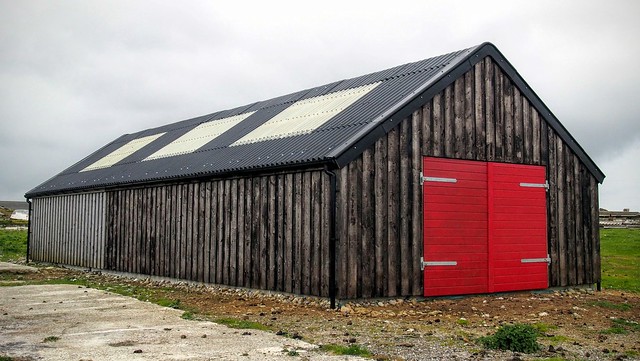 We took two trips to the Noust boathouse, which Alex helped build last year as a volunteer with Tog Studio. This is a very handsome and functional building right next to the ferry port.

We even did a bit of work, helping refurbish a boat. Well, you can’t relax the whole time you’re on holiday. We earnt our beer that night. 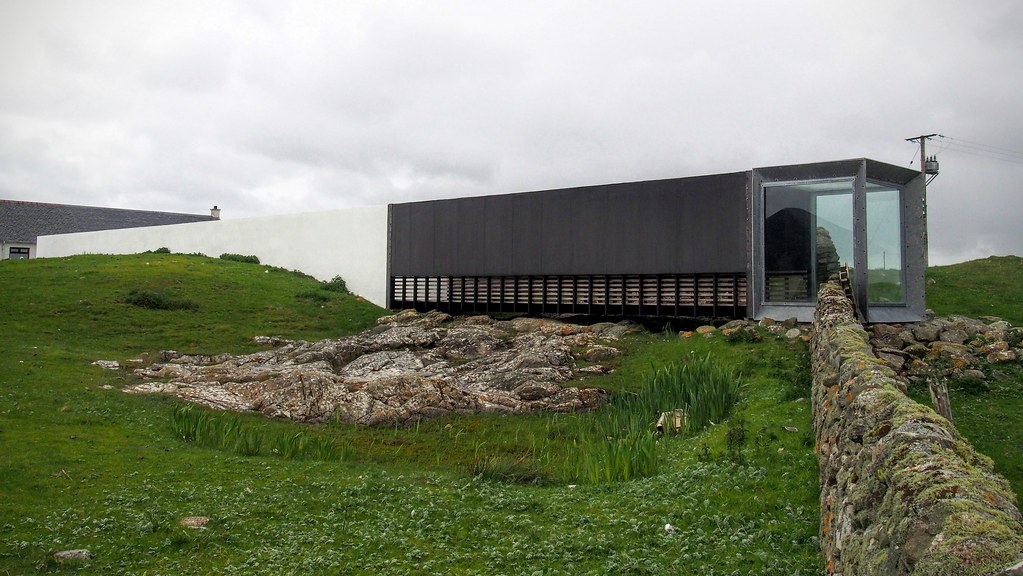 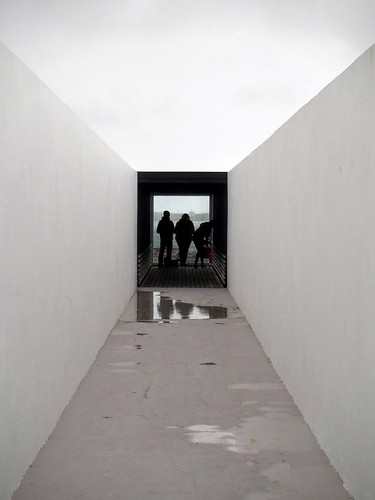 Also just a stone’s throw away from the ferry port is An Turas, this incredible art installation / lookout point. The unashamedly modernist structure is bold, yet its low profile blends in with its surroundings very sympathetically. 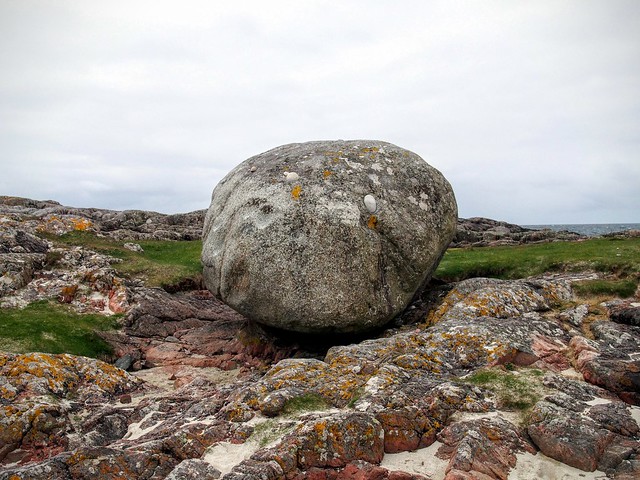 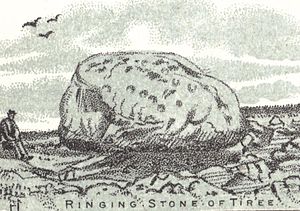 We took a trip to the less accessible north east edge of the island to see the ringing stone. We didn’t really know what to expect, but we had read about it in a few tourist guides and it sounded like a nice walk.

It is impossible to drive anywhere near the ringing stone, so we parked up at Balephetrish, the nearest town, and began the long, boggy walk. At the start of our journey we spoke to a couple who were on their way back from having seen the ringing stone. But after that, we didn’t see a single soul for hours – at one of Tiree’s top tourist attractions.


In the end, we almost walked past it, it is so inconspicuous. Although oddly, the reason we stopped at it was because I remarked that it looked like nothing like any of the other stones around. Consulting a nearby sign confirmed that we had reached our destination.

The ringing stone is a smooth boulder, about the height of a short person, balanced on its surrounding craggy rock. Tapping it produces an eerily metallic, hollow sound – hence its name.

It is thought the ringing stone was brought to Tiree from a nearby island during the ice age. Goodness knows why or how. Its ring must have made it a very special stone. 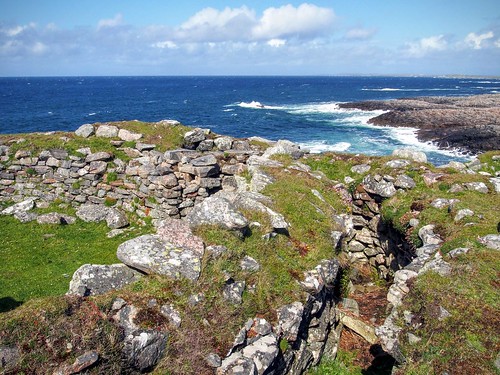 There is something about this inaccessible north-east part of the island. Travel the same distance again along the coast and you come to Dun Mor Vaul, an iron age broch.

The geography round here is highly spectacular, and the coastline faces towards the north. This probably made it a dramatic place to be in the more volatile periods of history. Brochs are thought to have been havens, but its location — perched on top of a rocky northern coastline — seems counterintuitively exposed. 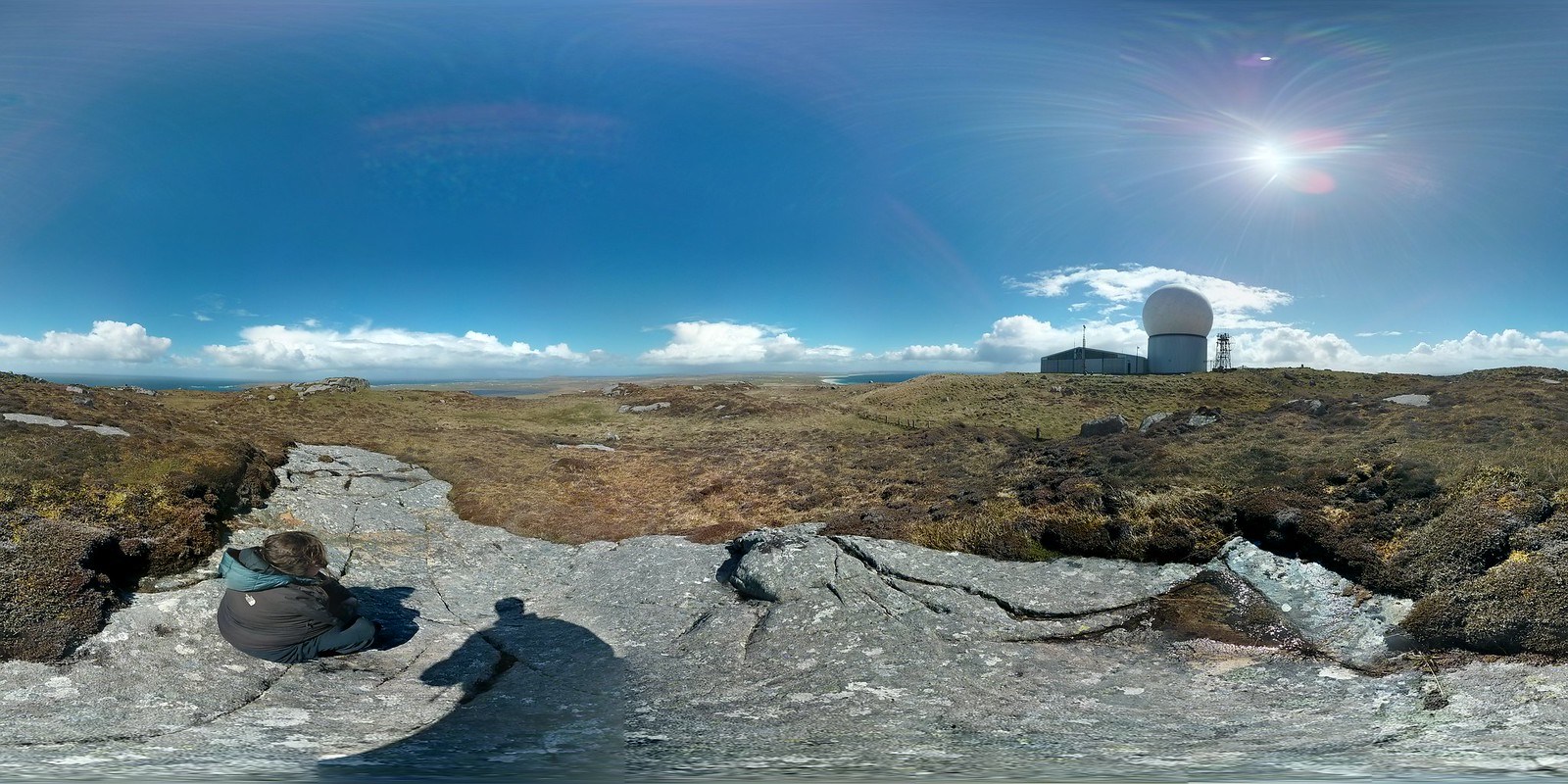 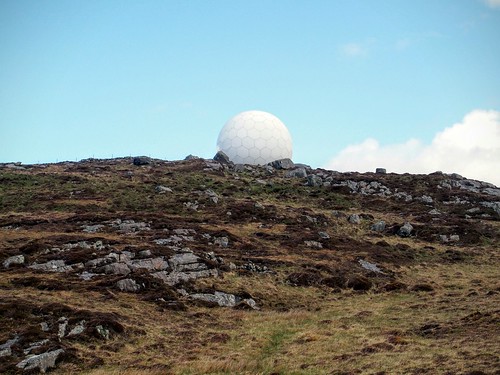 At the opposite end of the island is Ben Hynish. This is the highest point on Tiree. But even so, its height is rather modest at just 141 metres. To put that in perspective, that is 30 metres smaller than Dundee Law. It is only just taller than Edinburgh’s Castle Rock.

From the sea, we scaled Ben Hynish in well under 30 minutes, and we weren’t even particularly on a mission on our way up.

I enjoy walking up hills (especially when they are this easy!). It was impossible to forget to climb Ben Hynish, because the distinctive “golf ball” perched on top is visible from most parts of the island. It is a radar station monitoring air traffic across the Atlantic ocean.

The omnipresence of this modern surveillance building amid all the natural beauty gives Tiree a very Boards of Canada vibe.

Luckily, the trig point for the hill is outside the private area. But as you would expect, the radar station dominates the landscape at the top. 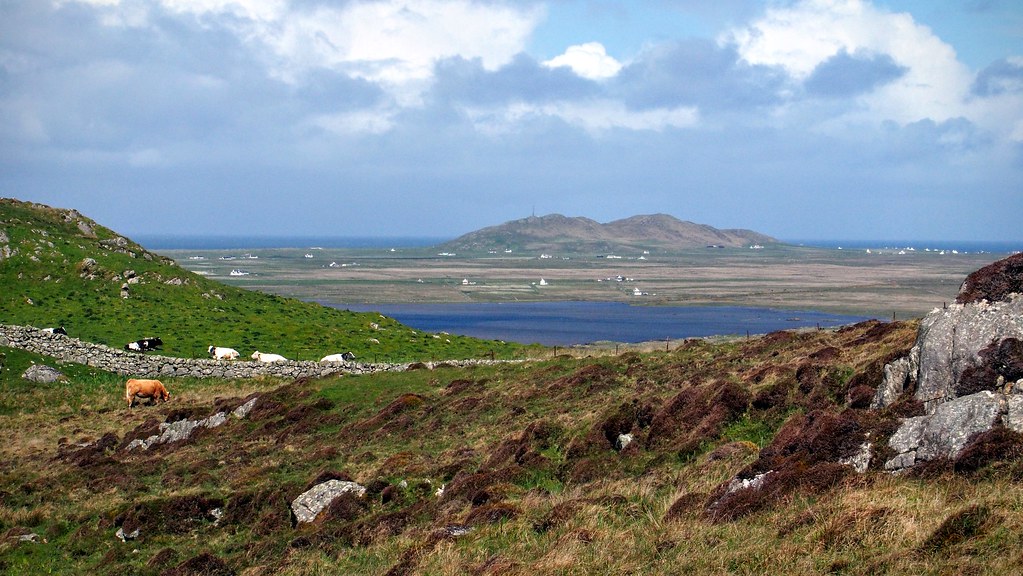 Nevertheless, you can get incredible views of the whole island from Ben Hynish. Visiting it was definitely one of my highlights of the holiday.

Click the thumbnail below to view the 360 degree photosphere I took there. 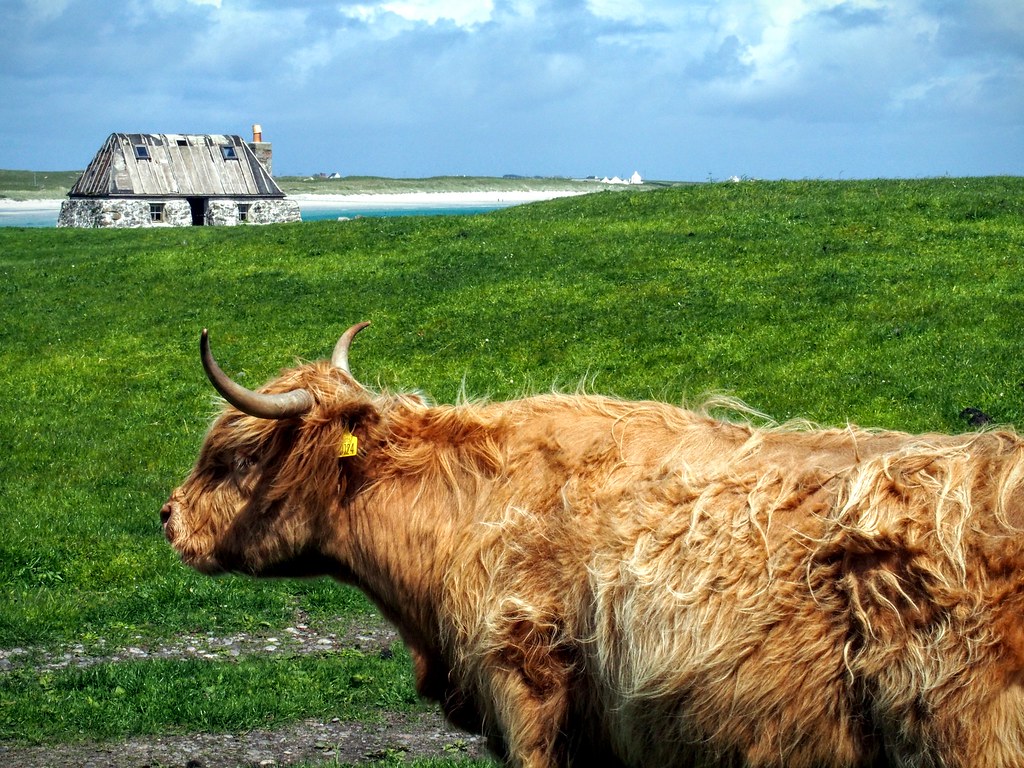 On the way back from Ben Hynish, we stopped off at the Farmhouse Cafe in Balemartine for a bite to eat. Outside were these incredibly cute Highland cows with their wee calves. 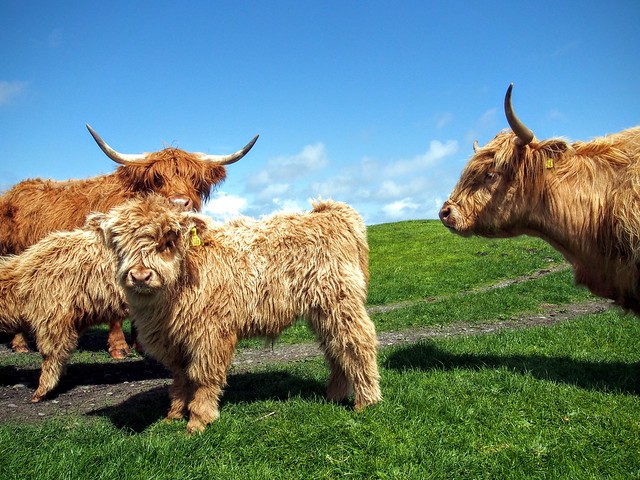 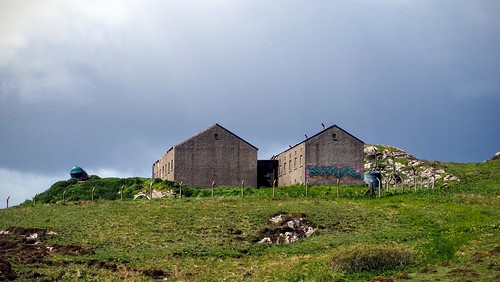 Another unique feature of Tiree is the evidence of its important role during the second world war. Grim, functional military buildings dot the landscape, particularly in the centre of the island where the airfield was.

Tiree’s location in the Atlantic thrust it onto the front line. 2,000 airmen and other staff were stationed in Tiree, which now has a population of just 650.

The airport remains operational as a civilian airport, with regular flights to Glasgow, Oban and Coll. 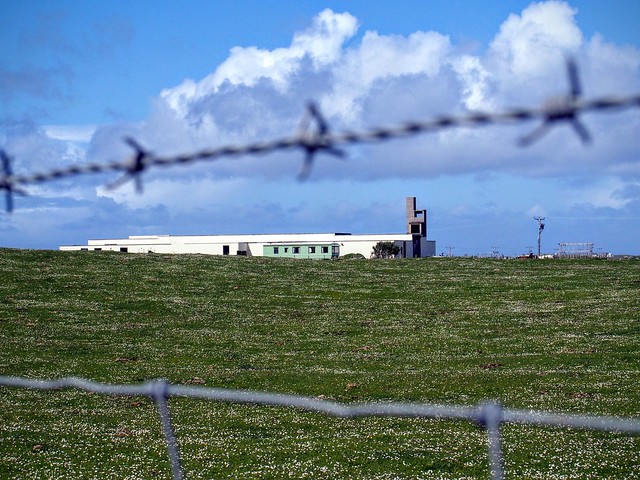 This building is now the home of Tiree Pottery, where we bought a couple of mugs. 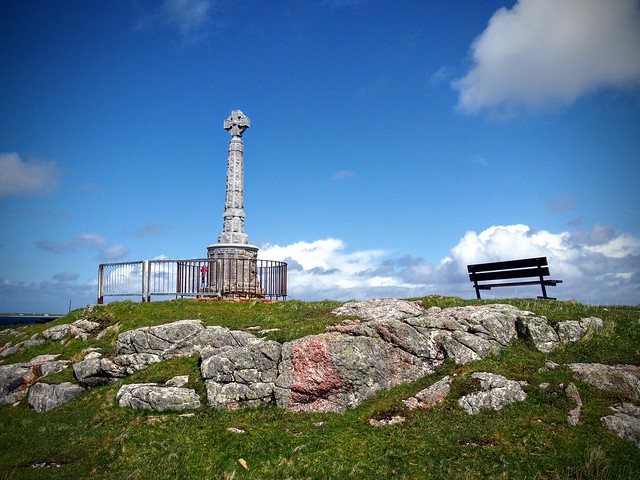 There is one grocery shop on the entire island: the Co-op. This doesn’t seem to be an issue, and indeed we found it to be a very well stocked Co-op.

But it’s incredible to think that there isn’t a butcher on the entire island. You wouldn’t have to be too careless a driver to accidentally catch your dinner. The island was heaving with lambs. Perversely, the only lamb you can actually buy comes from New Zealand.

In the adjacent car park is Sam’s Tiree Takeaway, a fish and chip van. I tucked into a fish supper, while Alex got a lobster supper. I can’t have that as I’m allergic to lobster, but Alex assures me it was delicious. 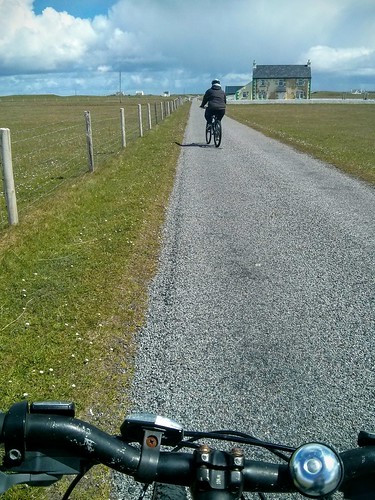 On our last day in Tiree, Alex and I decided to hire bikes and cycle round the island. The place being relatively flat, this might not have been a problem. But Tiree is also rather windy, which made the cycling challenging at times.

Before that day, I hadn’t really cycled properly for possibly 15 years. For my reintroduction to cycling, we traveled 23 miles in one day.

We chose to explore the far north-east of the island — a part we hadn’t really visited before. It was more or less at the opposite end of the island to where we were staying, but it nonetheless seemed ideal for a cycle.

The cycle on the way there was indeed glorious. We stopped off at several places we had driven past many times, but had been unable to stop at.

We wound our way along the northern coastal road, then along the magnificent Gott bay, up towards the extreme end of the island, finishing up in Miodar. We stopped off at a cairn overlooking the view towards Coll. 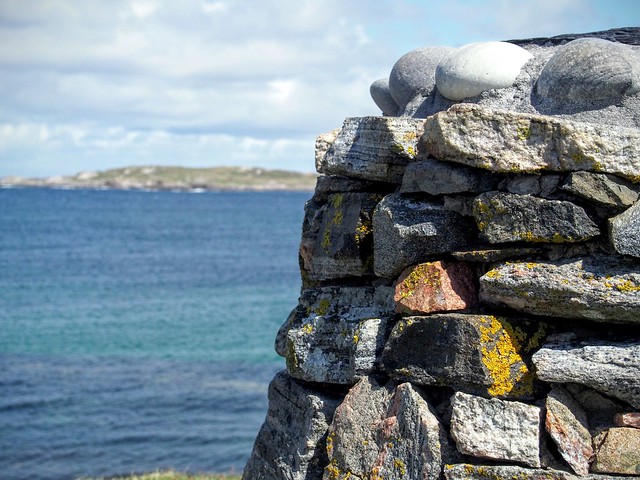 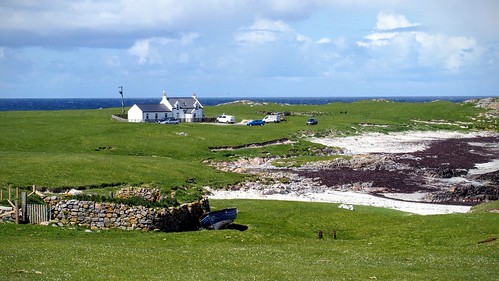 There we got chatting to a couple who lived in Miodar. After we told them where we were staying, they informed us that there was a bird hide halfway along the road from where we were staying. How could we have possibly missed that all week? Tiree’s secrets kept on revealing themselves all week long.

The return leg was much more challenging. Having come 12 miles, our legs were tired and our bottoms sore. The way back was also more uphill. Despite Tiree not having much in the way of hills, the gentle incline really made a difference. To make matters worse, we were now in a headwind!

We stopped off at the Tiree Lodge for a pint. Inside there was a healthy debate among the locals as to whether it is appropriate to sit your driving test in Tiree. The island is said to be the easiest place in the UK to pass your test.

Driving in Tiree does have its own challenges, particularly related to the sheep and cattle that will just wander across the road as you approach them. But Tiree also has no roundabouts, no traffic lights, and — most importantly — no traffic. I wouldn’t like to pass my test on Tiree then find myself having to negotiate the roads of a big city. 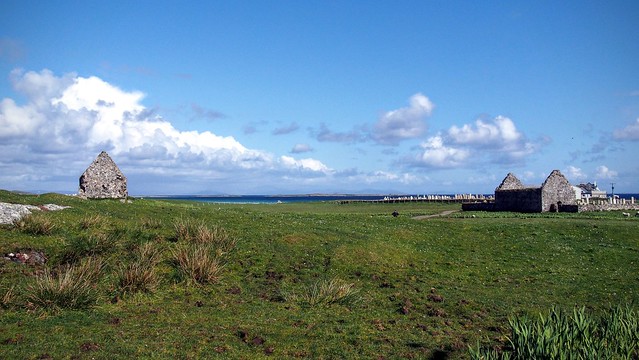 After our pub stop-off we explored the ancient chapels at Kirkapol before winding ourselves up for the final leg of our cycle.

Adding to our challenge was a massive hailstorm that was to prove unavoidable. One of the advantages of being somewhere as flat and open as Tiree is that you can see the weather coming in from miles away, and it may be possible to find shelter in advance. But there was no avoiding the massive storm cloud that was headed straight for our path. 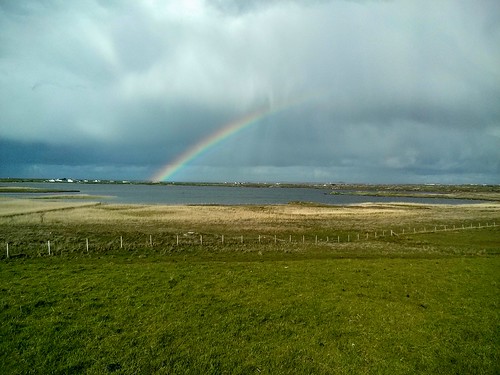 Having toughed that out, we didn’t have much further to go. But there was time for one last stop-off, at the bird hide we’d been told about at the other side of the island. We were informed that there would be binoculars there, but sadly there were none to be found. We did, however, get treated to a rainbow show. 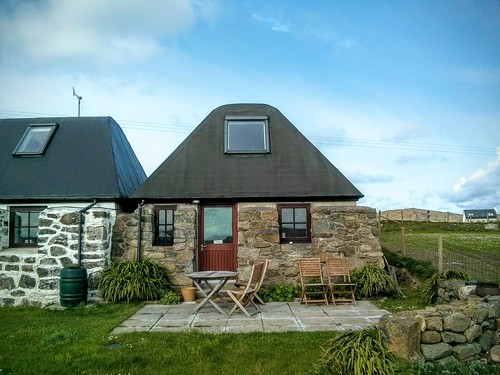 Having well and truly tired ourselves out, it was time to say goodbye to the wonderful cottage and to Tiree itself. My long-overdue first trip to a Hebridean island was a good one and I will definitely be doing more like it.

There is one thing about Tiree we won’t miss — the corncrake. Every night it kept us awake with its incessant nocturnal call. I took this video at 4am outside our bedroom window, the night before I left. Just in case I ever wanted to play it to myself at night time again.