The fight we face for the web’s future

People who work on the web are always thinking about what’s next for the platform.

But are we about to see a real transformation in how the web works?

A great deal has changed since the phrase web 2.0 was being bandied around. Most significantly, we have seen the rise of smartphones. Mobile apps have arrived as a result. The new mobile landscape has often been seen as a threat to the open web. You might even say the web is in crisis.

I care about this because I love the web. Its low barrier to entry, along with its inherent openness, has made it one of the most important and democratising platforms in history.

Tough questions for the mobile web

Yes, the web works on mobile devices. But the mobile web is an increasingly troubled landscape.

Web professionals have not been sharp enough at keeping a lid on page weight. In fact, the size of webpages has spiralled up and up.

Web developers use too much wasteful code. Marketers want too many flashy animations. And worst of all, publishers have entered a race to the bottom by stuffing their pages full of intrusive adverts.

A recent DoubleClick (Google) report outlined a number of frightening statistics that underline just how badly website owners have dropped the ball. To take one example, the report found that the average mobile webpage makes a staggering 214 server requests. That’s the average! Of those, 107 requests are related to adverts.

As a result of all this, people hate using the mobile web. (Incidentally, it is also little wonder that people don’t turn back once they have installed an ad blocker and discovered a much faster experience.)

Users are fed up and frustrated with the slow web experience.

The tech giants have reacted — by creating closed ecosystems. Facebook introduced Instant Articles. It is a speedy format, but a mechanism that keeps users firmly within Facebook’s walled garden, and away from the open web where people might — gasp — discover life after Facebook.

Apple News is at least based on an existing standard (unusual for Apple) — XML. But once again it is designed to keep users away from their web browsers, lest people discover content that has not been curated by Apple.

Google’s own answer, Accelerated Mobile Pages, is at least more open and web-friendly. But the fact that it even had to be invented in the first place still raises serious questions about the direction of the mobile web.

Then of course there are mobile apps. For those of us who loved the web because it was supposed to help end monopolisation, it is worrying that it is being usurped by closed mobile ecosystems that bake in the first-mover advantage. So much for the democratisation of communication.

But now — would you believe it — we are facing the prospect of the app boom being over. Most apps are seeing a decline in growth, with the top 15 app publishers experiencing a 20% decline this summer, according to Nomura.

Other research has shown that the majority of smartphone users download zero apps per month.

Yet apps are still apparently bigger than the web, accounting for 52% of time spent with digital media in the US. But 42% of the time people spend on apps is spent on that person’s one favourite app. For the vast majority of apps, retention rates are appalling.

The effort involved in developing a mobile app is unlikely to pay off. It is very hard to break through the saturated app market. Once people have downloaded the handful of apps they rely on, they are done. The current successes of Snapchat and Uber are outliers.

With apps facing a malaise just like the mobile web, what are the alternatives?

Android are developing instant apps that can run without the user having to actually install the app.

Installing an app just in case you need it in the future can be a thing of the past. So it is easy to see why this might be good for users. But it has the potential to further undermine the web to the benefit only of Google.

But Google are also pushing the concept of progressive web apps. These are essentially websites with added functionality — such as push notifications and the ability to work offline — that make them feel more like a native mobile app. The best of both worlds then — in theory at least.

Even more worryingly, Apple’s iOS devices still don’t fully support them. (The fact that Apple have a vested interest in diminishing the web is surely just a coincidence.)

Some people are quick to get paranoid about Google’s intentions. But it is in the company’s ethos to try out different approaches in a ‘survival of the fittest’ battle to see which one wins. Think of its plethora of messaging apps, or even the fact that it has both Android and Chrome OS.

But for those looking for assurance that Google would push the web above all else — or at least an indication as to where we should be focusing our efforts — this is a confusing picture.

So the web is in a malaise. And the app boom is over. Is that just hype? Maybe. But look to the technologies that are on the horizon, and the future becomes even more uncertain for the web.

The big tech firms are all investing heavily in virtual assistants that allow people to largely bypass the web. Ask for information and it is given to you — no web browsing required.

For instance, Amazon Echo envisages users speaking to a box in the corner of the room, without even needing to interact with a screen at all. But the true potential of audio interfaces will be on mobile (where else?).

Services like Siri and Google Now point the way to the rise of audio interfaces. I have written before about the potential advantages of audio-only interfaces.

If you think about it, screens are actually a terrible idea for a mobile interface. When you’re on the move, looking at a screen is the last thing you want to do. Unless you’re careful, you’ll run into a lamp post or step in a dog turd.

Apple’s controversial AirPods are not just a replacement for headphones. They are smart devices of their own. Built-in Siri is surely just the start. AirPods are almost like Google Glass, but without the glass.

Google, Facebook and Apple are all putting huge amounts of effort into messaging. Each firm’s own virtual assistants are being integrated into their messaging apps — such as in Google’s recently-launched Allo.

For a sense of what to expect, we can turn to China. Digital culture there is massively different to the west. But it may well point the way to our digital future.

In many ways, western digital culture is still firmly rooted in habits that were formed in the home PC era. As outlined recently by Mark Pesce, in many ways we still treat our phones as pocket PCs. In China, most people went straight from paper to smartphones. So they see their devices for what they really are — at least more so than we do in the west.

One of the first things anyone will tell you about China is that WeChat is massive there. Not only does it frame many digital interactions. In the words of one WeChat product manager, “At every time throughout the day, there is a touchpoint between WeChat and your normal life.”

WeChat is much more than a messaging app. It has effectively displaced the web browser. 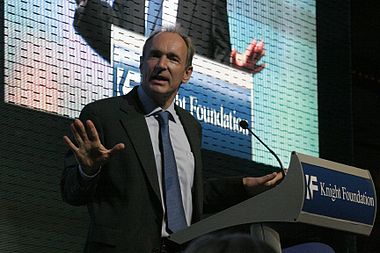 Earlier this year, Tim Berners-Lee (the inventor of the web) went to a conference called the Decentralized Web Summit to discuss the future of the web. The slogan: “Locking the Web Open”.

Tim Berners-Lee is aware of many problems with the web that were unforeseen 30 years ago:

It’s been great, but spying, blocking sites, repurposing people’s content, taking you to the wrong websites — that completely undermines the spirit of helping people create.

The aim of the conference? To discuss:

…what might happen… if they could harness newer technologies — like the software used for digital currencies, or the technology of peer-to-peer music sharing — to create a more decentralized web with more privacy, less government and corporate control, and a level of permanence and reliability?

One of the main problems seems to be that the technologies that underpin the web are just a little old-fashioned now. The web is almost 30 years old now, but the concept of hypertext goes back even further to the 1960s. Hypertext-like ideas can be traced back yet further from there.

If in China people are scanning QR codes to make payments, and here increasingly people are saying “OK Google” to get answers, why should an old-fashioned hypertext-based format necessarily have a future?

Today, the web still runs on technologies of the older world.

Consider payments. In many cases, people pay for things online by entering credit card information, not much different from handing a card to a merchant for an imprint.

…computer scientists talked about how new payment technologies could increase individual control over money. For example, if people adapted the so-called ledger system by which digital currencies are used, a musician might potentially be able to sell records without intermediaries like Apple’s iTunes.

Think what could be achieved if the web — or a platform like it — could be reinvented for the modern era, built on modern technologies.

A way forward for the web

Peter Gasston’s excellent article Surveying the landscape provides a comprehensive overview of the many challenges facing the web today.

It’s not all doom and gloom though. The piece finishes by outlining a number of different ways of rethinking the web.

So advocates of the web now need “a 20+ year vision that transcends web browsers”. We are encouraged to think of web content not as living within the browser but as “any user experience that’s delivered across multiple channels and devices”.

The world lucked in when the web was invented by Tim Berners-Lee rather than a self-interested tech firm like IBM or Microsoft. By gifting it to the world, he and Cern embedded its open principles and kickstarted the digital revolution.

The concern is that today’s innovators are all self-interested parties who will seek to undermine the principles that made the web so successful and important. That is why it is so important to cherish the web. Let’s fight for it.